To some, Lárus Sigurðsson is known as a maker of jarðhörpur ~ stringed instruments formed from the rare wood of Iceland.  To others, he is known as the guitar player of Stafrænn Hákon.  But for the past decade, he’s also been making music of his own, collected on Minco Eggersman’s VOLKOREN label.  The latest is a recently completed trio of EPs, collectively titled the Ambient Piano Trilogy and individually titled The Beauty of an Ending, Threnody and Moonlit Sea (Tungllitað Haf).  The 21 tracks have a playing time of 77:11, which may seem unimportant to younger fans, but those who enjoy burning CDs will appreciate the fact that the three can fit on one.  Even better, there are no seams between the three, allowing them to play perfectly as a long, peaceful album. 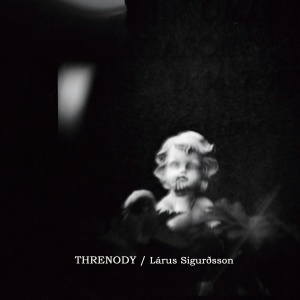 And peace is what Sigurðsson seeks in this set.  Sprung from a period of mourning, these improvisations were recorded “in a little Icelandic church” (which happens to be the norm ~ some countryside churches seat only dozens).  The intimate nature of the setting, combined with the artist’s internal melancholy, combine to form an introspective collection in which no piece overstays its welcome, but each contributes to the whole: perhaps a metaphor but more likely a representation of music as salve.  Sigurðsson’s subtle electronics are ever-present, along with a female voice which sounds like a requiem, that very word being the former title of the first EP.  To choose The Beauty of an Ending is to change not the script, but the reaction.  Beauty born of sorrow can be incredibly moving, and the set sounds like a person working through, and then letting go of sadness.  One can imagine the small church, the snow-covered landscape, the wild horses crossing the streams.  And what do they know of sadness?  Life goes on, untamed and unpredictable.

Iceland has the highest percentage of writers in any nation.  One can glean the literary backdrop of the trilogy in the titles of the songs, which seem like clues.  Chapter One includes “Then I Saw You” and “We Walked Away;” Chapter Two “Welcome to His World” and “And Then He Came;” Chapter Three “Yes To It All,” “We Can Talk,” “Shame Creeps In” and the enigmatic closer “Hide Behind A Color.”  We can imagine that this is about a relationship, as so many things are; the artist admits to being “at a crossroads, having to turn away from his work and dwelling place.”  So what remains? The body, the instrument, the music.  Goodness can still flow through this mind, this heart, these hands.  And here are the seeds of recovery, safe from the elements in the little church, the wind blowing outside, the spirits of worship and awe residing inside.  While the artist may seem alone, he has friends: hands holding him up, massaging his shoulders, clapping in encouragement.  When sung for others, songs of sadness come across as empathy.

We recommend that the trilogy be taken in as a whole; all three parts are of uniform quality and share the same timbres.  The cumulative weight of the set carries the listener through the stages of grief to the altar of acceptance, where Sigurðsson lays his hat.  Many of Iceland’s smallest churches lack locks; we imagine him closing the doors when he leaves, trusting that the next person to enter will feel the echo of the notes lodged in the wood.  (Richard Allen)