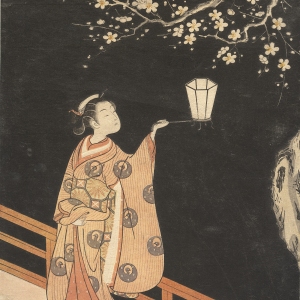 We last reviewed Hiroshima’s Meitei in our 2018 article, Music for Haunted Houses.  The new album preserves the nostalgia while replacing ghosts with memories.  Komachi is a work of unique beauty, a time-spanning mix of influences old and new, a celebration of the past that leads to a greater appreciation.  A limited edition features an expanded selection of Ukiyo-e images, but the music is the main attraction.

The impetus for the album is the recent loss of the artist’s 99-year-old grandmother.  One century ago, cultures and styles were different ~ and while some customs are better left in the past, many others are worth preserving, and are on the verge of becoming extinct.  Meitei calls these valuable legacies “the lost Japanese mood,” writing, “I want to revive the soul of Japan that still sleeps in the darkness.”  The components include honor, respect, ritual and the power of folklore ~ and if these are stereotypes, at least they are positive.  More than other cultures, modern Japan is simultaneously steeped in the extreme past ~ haiku, veneration of elders, an appreciation of the ephemeral ~ and the extreme future, as represented by technology and anime, where a single frame may include a hologram and a cherry tree.

Meitei hopes that the new will not crowd out the old.  His music dresses an ancient mood in a modern framework.  Water and electronics fill the opening moments, underlining the temporal tension. Folk melodies glide through the elaborate mix.  The placement of notes is akin to a Zen garden, but only some of the instruments are traditional, and the production values are contemporary.

The recent Western fascination with forest bathing reinforces a popular Japanese practice: to spend time in nature for the replenishment of the soul.  Modern industrial societies may banish nature to the outskirts of cities, but even those in cubicles are encouraged to add a token, such as a plant, but even a photo of a plant said to offer light restorative possibilities.  Meitei’s field recordings, in particular those of water, serve the same purpose.  They may be only a reminder, but a reminder is often enough to set thoughts on a more peaceful path.  The chime tones of “Sento (Pt. II)” may not come from a temple, but are reminiscent of a temple, and as such provide a modicum of solace.  The pauses in the track, albeit brief, stand in opposition to the nonstop pace of industrialized city life.

The flickering “Chouchin” illuminates the album from the inside out.  The “Japanese lantern” is represented by Suzuki Harunobu’s woodblock print.  The combination of modern and traditional instruments produces an unusual feeling of the past seen through the eyes of the present, a sonic parable of twinkling light.  “Maboroshi” (“Illusion”) offers an even stranger experience, gazing at distant memories through abraded trip-hop loops.  Such combinations are extremely difficult to execute, but Meitei’s dedication to history helps him to achieve authenticity.

The project seems like a dance of past, present and future selves beneath a canopy of fireflies.  When the dream ends, the memory remains; but as the day progresses, the memory begins to shift, leaving only the impression of komachi.  (Richard Allen)