The most immediate distinction between Go West and Modern Country, Tyler’s previous record, is the shift away from the hypnotic influence of krautrock. Ditching Wilco’s Glenn Kotche for Dawes’ Griffin Goldsmith on drums has lessened the propulsive nature found on that record and replaced it with a pensive softness. Tyler’s arrangements still function similarly, with guitar phrases circling around a subtly varying rhythm section, but now the melodies proudly stand front and center. Some rich texture is lost, but high-resolution clarity is found along the way. 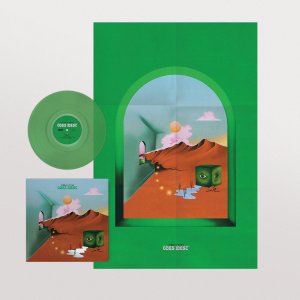 “Not in Our Stars” and “Eventual Surrender” each exemplify Tyler’s ear for simple beauty with two chord progressions that cycle in and out of each other and somehow retain their freshness through to the end. Similarly, “Fail Safe” makes do with nothing more than two guitar motifs bouncing around percussion one might hear at a square dance. Opener “Alpine Star” ushers the listener into starry-eyed Americana in three distinct sections, connecting the self-containment of Tyler’s guitar playing with an underlying restlessness and refusal to stay in one place for too long. It’s his first record that doesn’t contain anything longer than six minutes.

Throughout his discography, much talk has been made about Tyler’s skill as a wordless storyteller. Perhaps these claims are built on an intertwined notion of Americanness and the fading frontier that translates so directly into instrumental folk music, or maybe it has to do with the equally common “driving music” descriptor that’s (not unfairly) bestowed upon his work. The language that Tyler bends and manipulates on six strings certainly recalls some long forgotten idealization of expansive highways and pastel sunsets— not unlike the surreal painting that adorns the album cover. This language of confident, melancholic strumming, as heard on album highlights “Man In A Hurry” and “Not In Our Stars,” begins to feel more authentic than whatever beautiful image it might bring to mind. In turn, his “stories” start to feel more like distilled moments, or an auditory response to reflections on a twilight saunter.  (Josh Hughes)