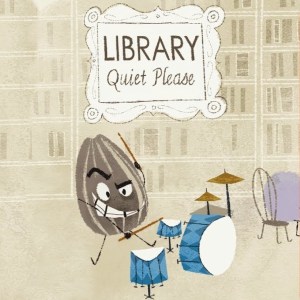 Experimental artists love to collaborate.  This spring we’ll encounter more team-ups than a Marvel movie. This is a great sign for the industry, and it serves as a larger parable of hope: at the same time as many are erecting borders, those in the artistic community are knocking them down.  Much of the spring music slate is avant-garde, but some is surprisingly accessible.  From free jazz to field recordings to mutated vox, fans of the adventurous will find something here.  We hope you enjoy our preview of spring’s experimental music!

Our cover image is taken from the delightful children’s book The Bad Seed by Jory John (HarperKids).  John also wrote The Good Egg, which will be displayed tomorrow. Check out the fun trailer here.

Rich’s Pick:  Various Artists ~ STUMM433 (Mute, May)
As part of their Mute 4.0 (1978>Tomorrow) campaign, the label is preparing to release a boxed set of interpretations of John Cage’s “4:33.”  Artists include Ben Frost, Depeche Mode, Wire and even a few we thought had retired (Miranda Sex Garden, Nitzer Ebb, Renegade Soundwave).  Proceeds benefit the British Tinnitus Association and Music Minds Matter, honoring the memory of Inspiral Carpets’ Craig Gill.  Here’s a video from Laibach to set the stage:

Also on Mute we find the ethereal KÁRYYN, who has been unveiling her Quanta Series slowly over the last year.  Don’t be fooled by the accessibility of the first single; the vocal layers fold and churn, in the manner of Holly Herndon.  The album is both personal and political, a response to loss as well as a statement of solidarity in a fractured world (March 29).

Harp and synth perform a slow, beautiful dance on New Rain Duets, which nearly fell into our ambient category, save for some unusual glissandos.  Mary Lattimore & Mac McCaughan‘s album is out March 22 on Three Lobed Recordings.  tsss tapes will be releasing two collaborative efforts this spring.  Masayuki Imanishi and Marco Serrato‘s Caura is an exercise in double bass, contact mikes and field recordings (April 2), while Graham Dunning and Edward Lucas‘ End of a Cable combines trombone, turntable and snare (June 6).  Vibraphone and double bass produce a contrast of high and low on Clock Radio, the upcoming album from Michael Davidson & Dan Fortin.  In the process, the shapes of free jazz are bent and split (Elastic Recordings, March 22).  Also combining vibraphone and bass (with other instruments) are Massimo Pupillo and Tony Buck, who will be releasing two interrelated albums this spring, each showcasing a pair of side-long tracks.  Unseen (pictured right) and Time Being share a cover aesthetic, and will appear March 22 and 29 on Trost.  Important Records has lined up a trio of releases for April 12.  First, Anthony Burr and Charles Curtis perform the work of Alvin Lucier and Morton Feldman on Chamber Music, which includes two new compositions, as well as another new Lucier work, Orpheus Rising, for solo cello and seven wind instruments; and on the same day, Rosalind Hall tinkers with perceptions of time on Drift, a multi-instrument work led by alto saxophone.

William Hooker has spent as much time in music as the Israelites did in the desert.  Cycle of Restoration sees him combine his percussive talents with trumpet and bass (FPE, March 22).  Drums and electronics form the core of Terreng, from Jon Wesseltoft & Balazs Pandi.  The side-long tracks allow plenty of room to breathe (Moving Furniture, April 26).  Reeds and drums are the order of the day on Screen Off, the upcoming album from Paal Nilssen-Love and Ken Vandermark, while Nilssen-Love joins two other friends as Arashi to form a drum, double bass and sax trio on Jikan (both on PNL, April 26).  Bucking the trend is Peter Orins, whose solo drum set Happened by Accident contains a list of other ingredients, including bowls, wood and shells (Circum-Disc, March 22).  Actuelle CD has a trio of releases scheduled for release on 21 March.  Fleur de Chaos is an electro-acoustic work from HMMH that includes voice, tuba and synth, and begins with an “Open Call to Love.”  John Butcher + Philippe Lauzier + Eric Normand ask, How Does This Happen?, filling their disc with fragile improvisations; and on Pre-Fall, Whim Ensemble “cut, splice, loop and reverse” their compositions until few signposts are visible. 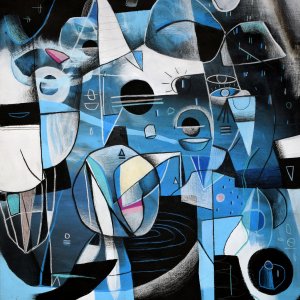 Charlemagne Palestine‘s The Golden Mean is described as “a journey through the octave” for two pianists.  43 years after the original work, the artist is joined by Rrose for a new take.  The Goldennn Meeenn + Sheeenn is released April 26 on Eaux.  Drone and chamber orchestra combine on minimalist composer Ernstalbrecht Stiebler‘s double album Zwischen den Tönen, which contains pieces written from 1997 to 2018 (Telemark, March 26).  Most people would never dream of playing two instruments at once, but Michaël Attias performs the feat on piano and saxophone.  The tracks start simply but gain complexity as they unfold.  èchos la nuit is out April 5 on the aptly titled Out of Your Head.  Polyorchard will be releasing two albums on March 20.  Black Mountain is a studio version of a live recording that sees them as a quartet, while Sommian is a work of spacious experimentation recorded as a quintet.  Phew, Oren Ambarchi an Jim O’Rourke share a live improvisation session on the impressionistic Patience Soup, due March 29 on Black Truffle.  Joshua Abrams and Natural Information Society return this April with Mandatory Reality, an album of exploratory jazz on Eremite Records.  The adventurous Elder Ones is a free jazz unit centered on the vocals of Amirtha Kidambi.  On Holy Silence, these vocals were abstract; on From Untruth many are direct.  The music is just as wild as ever (Northern Spy Records, March 29).  Sales de Baño merges psych jazz with free rock and improv on the melodic yet abstract Geometría del vínculo (Geometry of the bond), due April 30 on Lima’s buh records.  Raucous improv is the order of the day on Tolerancia Picante, the upcoming set from MoE/Mette Rasmussen (March 29), while Sly & the Family Drone kick out the jams on Gentle Persuaders (Love Love Love, April 26, pictured above right).

sceptre fretpen sculpts improvised recordings into ambient and electronic shapes, performing a trick on the ear.  Earthquake Park is released March 21, and should appeal to fans of all three genres.  Five planets worth of “found planetary sounds” are folded into the guitars and pedals of Li Yilei‘s 0:00. Add Earth for a near-complete set.  The tape enters orbit on March 22 (Ferric:Flux).  Regis Renouard Larivière writes of “overcoming time” on Contrée, an intricate electro-acoustic work that sounds like radio waves beaming back from outer space (Editions Mego, April 12).  Sonnet/Matsumodo uses the phrase soft time to describe its percussive sessions, improvised while watching hourglasses.  Versus is released April 19 on Sounds et al.

Ingar Zach is joined by Caroline Bergvall, Quatuor Bozzini and Kim Myhr on Floating Layer Cake, which includes long, low tones and pensive poetry (SOFA, March 29).  Vocal and electronic improv can be found on the intriguing filament, from maverick artist petra.  Her experiments reflect not a movement away from the mainstream, but an alternative path (March 22).  The words of Naomi Jackson are more legible, but they stutter and fall back on themselves, forming new shapes.  Partner/Emotive is out April 4 on The Lumen Lake.  Vocalist/instrumentalist Muyassar Kurdi was given free reign to choose tracks for the Fabrica compilation Reality Tunnels.  The result is a diverse collection including as many timbres as nations (March 25).  Coscienza di sé is dedicated to feminist and anarchist Emma Goldman.  The delivery of the lyrics is far from placid; expect screaming and vocoder atop an art punk base.  We’d expect no less from the uncompromising ?Alos and Xabier Iriondo (Sangue Disken/Cheap Satanism, April 12).  A.I. makes its move on Holly Herndon‘s Proto, blurring the line between woman and machine.  In the Eternal video, humans seem to glitch like Max Headroom; in the studio, Herndon cedes control to devices of her own creation (4AD, May 10).

After a series of successful AV performances, Brian Harnetty is finally set to unveil Shawnee, Ohio to a larger audience.  The set revolves around an extensive series of interviews with local residents, who relay the history of the mining town with love, focusing on its economic and environmental decline.  The intricate music includes contributions from Paul De Jong (The Books) and Anna-Roberts Gevalt (Anna and Elizabeth).  Look for it April 26 on Karlrecords.

Ehsan Banitaba folds field recordings into a search for God on In Parallel, using ambient elements to create a spiritual vibe (Focused Silence, April 5).  Frogs, flies and flutes are all participants in Point Defects, an electro-acoustic work from Ellicist (including a member of Driftmachine).  If that description makes you expect new age, the video for Ponds & Graves should convince you otherwise (Morr Music, April 12).  Field recordings and the Buchla synthesizer create intrigue on Marja Ahti‘s Vegetal Narratives.  Inspired by the work of Rene Daumal, the album is unleashed March 29 on Hallow Ground.  Field recordings from Sweden and Germany form the core of René Aquarius‘ Isle, which is “created to give the listener the feeling of being all alone on an island” ~ a perfect daydream as we await the warmer weather (Zona Watusa, April).  Recital will be releasing two beautiful albums on April 19.  The first is Dreams of India & China, a soundscape comprised of Rip Hayman‘s archived cassettes.  Field recordings and meditative music form an alluring tape collage, a (soft) blast from the past.  The second is Matthew Sullivan‘s Matthew, an international blend of field recordings and on the preview track, even a choir.

The Edições CN “artist in situ” series (last experienced with Gonçalo F Cardoso) continues with a new soundscape from Christophe Piette.  The artist traveled about the volcanic island of Jeju to record Six tableaux de Quelpaert, which touches on themes of feminism, mysticism and identity (April 20).  And the PhoNographic Mornings series continues with a season in Southeast Asia, courtesy of Stéphane Marin and a host of weekly contributors.  A new track will be added every Sunday morning until the set is complete on June 9.