This one goes places. (Headphone-listening recommended)

While in New York, I was lucky enough to witness the psychedelic salsa group La Mecánica Popular break it down at Nublu in Alphabet City, on a terribly rainy day that was warmed up by their fiery grooves. I sat down with Efraín Rozas a couple days later to talk about the trajectory of the band, as well as his solo work, the role of NYC in the history of Salsa, and much more. If you’re not well versed in salsa, cumbia, etc, this is a deep dive that moves through those styles as well  hip hop, footwork, ambient and experimental percussion, so I hope our regular readers/listeners will find this an interesting excursion.

Episode 3: ROBOT TEACH US TO GROOVE

Sound Propositions should be available wherever you get your podcasts, so please keep an eye out and subscribe (and rate and review, it helps others who might be interested find us).  New episodes will be published every two weeks.

Rozas is a Peruvian-born, Brooklyn-based performer/composer and robotics/software developer interested in new paradigms of cognitive technologies and mythologies. His 2017 solo release I Enjoy the World received some strong praise from critics including the Wire and The Hum. Efraín also leads the aforementioned experimental Latin American ensemble La Mecánica Popular, named “Radical Afro Latin Futurism” by NPR, and best album of 2018 by most of the main music media in Peru. The ensemble draws on a wide range of influences, from Miles Davis’ electric period to Brazilian Tropicália, striking a dance floor friendly groove against which trance inducing psychedelia and atonal textures are free to go crazy.

Also the host of the radio show La Vuelta al Día en 80 Mundos, Rozas takes listeners on a globe-spanning journey of experimental explorations, featuring everything from avant-garde to ethnographic field recordings, via  Filarmonia, the only non-profit FM radio in Lima, Peru. He also works with software, building a robot which he taught to improvise percussive rhythms. This multi-part robotic installation Myth and Prosthesis is something to behold, as you can see in the live video linked below.

Rozas’ three-part Myth and Prosthesis series utilizes technology, software, and robotics to explore the creation of rhythm from new perspectives. Myth and Prosthesis began with  Do robots have an Ethnicity?, which considers who and for whom digital technologies tend to be made. Under these conditions,he asks what role indigenous and non-Western cosmologies have within these new technological systems. He designed a robot, which he coded and built, to perform improvised rhythms on Batá drums, used in Santeria/Yoruba, considering the drum, and its rhythms, as a form of technology in itself, a technology which conceives of the relationship between the mind and body in very different terms than the Cartesian model which has long dominated Western thought.

I Enjoy The World is the second installment of the series, a reflection on the relationship between body, mind, reality, technology, politics and culture. It is an immersive, site specific sound installation that creates a sonic meditation environment, which uses music as its main medium, together with video, poetry and robotics. While it is an art installation,  music is at the core, and for this second phase he utilized his improvising robot to compose I Enjoy The World with him. This 40 minute musical work is available digitally and on tape.

Robot, Teach us to Pray, is the third and final installment, exploring the use of technology as a site ritual. Here Rozas has created a kind of ceremonial rite that upends the traditional Western dichotomy between mind and body, and asks why the movements the body are so often excluded from the discourse on “serious” music. The history of dance, of moving our bodies together, is intrinsically tied to the history of music, and points towards modes of knowledge production that are utterly embodied. It is, of course, from this work that I paraphrased the title of this episode.

Efraín describes his work with La Mecanica Popular as the secular aspect of his practice, with the social ritual of dancing together, while Myth and Prosthesis occupies the sacred aspect of his practice, intent on creating new rituals and ceremonial practices, which function both in the space of the gallery and as individual meditations.

Our conversation begins with the work of the unconventional theatre director Eugenio Barba in Latin America. I intended this as a kind of epigraph, as it foregrounds the importance of performance and collaboration to Efraín’s work, as well as his own deep explorations of Latin American arts. We discuss how his salsa band explores the intersection of groove-based dance music with experimental music, and reflect upon the different aspects of Rozas’ practice, the sacred and the secular.  We also discuss how his work challenges the pervasiveness of the mind/body duality and the ways in which  Latin rhythms can offer a counter-perspective, and we consider the future of Latin music, the influence of NYC on salsa’s history and his own musical development, and much more. 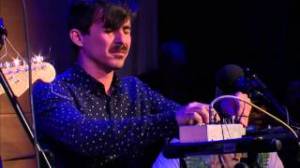 Sound Propositions the podcast has the same mission statement as the written Sound Propositions features: to share in depth discussions with artists whose work we love, to delve into the details of their creative practice.

Highlights from the Rumble in the Jungle (Ali vs Foreman, 1974)

Field-Recording – The Birds and the Bugs, Park NYC

Field-Recording – On the Amtrak between Montreal and New York