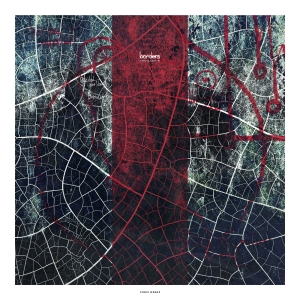 We suspect we’ll be hearing a lot of Brexit albums this year, as nearly a dozen have already been announced. Borders is one of the best, capturing the claustrophobia of xenophobia through clouds of drone and the sadness of a breakup through waves of melancholy.  Titles such as “Brinkmanship,” “Rudderless” and “Fake News” hammer the point home.  The populace is sad, angry, disappointed, scared.  Through it all, musicians are compelled to keep making music, to paint what they hear in notes of distilled grey.

This crisis is not confined to Britain.  The United States has its own manufactured border “emergency,” while isolationists continue to gain ground in other nations.  The album art uses a leaf as metaphor, with blood in place of sap.  As one part suffers, so does the whole.

A politician speaks in the opening track, “Leavers and Remainders,” and after that, there are no words.  This itself is a metaphor; the government has claimed that the enemies are outside the borders while ignoring those within.  The series The Walking Dead captures this thought perfectly; the zombies are not the real problem.  In “A Landscape, Divided,” a bell tolls and tolls, but for whom?  Is this track a purposeful requiem, or are the churches all set to run on timers, their chimes a soulless reflection of human absence?  The closing static is a reminder that not every signal gets through.  In like manner, the loops of the title track imply circular conversation, being stuck in a loop of recrimination, during which nothing gets done, and systems abrade.

Melodies are playing, but is anybody listening?

The album really takes off with “Bulletin of the Atomic Scientists,” inspired by the inventors of the Doomsday Clock.  A slow sense of menace grows throughout the track, peaking as stereo effects send the notes from speaker to speaker.  By the next track, the loops are already beginning to run down, the clock approaching midnight.  Weeks reminds us that the bad things have been building for quite some time, the water ready to boil over just as the kettle is ready to crack.  This is the midpoint of the album (when the bonus tracks are included, the one-third mark).  In which direction will it turn?

The return of the chimes seems ominous.  These were not hour markers, but portents of the end times.  Midway through “Brinkmanship,” the tolling stops.  Nuclear war, environmental collapse, terrorism and isolationism meet at the juncture.  We might have been able to stop one, but all four?  If there is any respite to be had, it lies in the wobbling “Pay No Mind,” a brief piece that seems like a ceasefire. The tapes begin to spin again, rudderless, culminating in a loosely-spooled version of “God Save the Queen,” which Americans will hear as “My Country, ‘Tis of Thee,” a shared and sullied anthem.

Stay tuned for the bonus tracks.  Like the best post-credit sequences, they add to one’s appreciation of the project.  Organ, bass and brass lend “Living in Segregation” a fractured dignity.  For the first time, drums enter the fray.  The flag, albeit tattered, still flies.  An alarm sounds in “This Is a Test,” the title referring to transmissions which warn of a greater, future danger.  And then, six minutes into the eight-minute “The Illusion of Control,” an electronic dance segment breaks out.  A dream of another sort of victory?  A sliver of hope?  These two minutes change the tone of the album, cemented by the sweet coda, “Freedom of Movement.”  Borders is gracious enough to invite listeners to choose their own ending.  Back in the real world, this same principle still holds true.  (Richard Allen)