This episode features John Daniel, a Chicago-based musician best known for his ambient solo project, Forest Management. I caught up with him via Skype from his childhood home in Cleveland over the holidays. We discuss his latest LP Passageways (which was inspired by his childhood home), his influences and inspiration to form a solo project, how his approach to music has evolved, his new imprint Afterhours, and the importance of place, space, and community. As per usual, headphone listening is recommended. While I haven’t incorporated any binaural field-recordings in this episode, I do utilize the stereo field, and in general the fine details are easier to appreciate with headphones.

Sound Propositions should be available wherever you get your podcasts, so please keep an eye out and subscribe (and rate and review, it helps others who might be interested find us).  New episodes will be published every two weeks (more or less). You can support Sound Propositions on Patreon if you are so inclined. One of the rewards for supporting the podcast in this way is access to vocal-free versions of the episodes,  that is, more traditional mixes, as well as other benefits for higher tiers of support, including custom made mixes, soundscapes, and collages.

With such a prolific output, it’d be difficult to overlook Daniel’s Forest Management. Emerging from the fertile Cleveland, Ohio tape scene nearly a decade ago, Daniel has maintained a steady pace of releases ever since. While that is the project for which he is best known, Daniel began his music career as a drummer, initially in a post-rock inspired instrumental quartet called Royal Waves. Many of my favorite composers and producers have their origins as percussionists, and I suspect that there is something about that role that lends itself towards thinking compositionally. Daniel explains that an interest in singer-songwriters, such as Elliott Smith and Nick Drake, led him to gravitate towards the style of experimental composition typical of solo artists on Type records, an influence we explore in some detail in our conversation. The songwriting of artists like Peter Broderick, Heather Woods Broderick, Jon Mueller, and Grouper became inspiration for founding his own solo project. 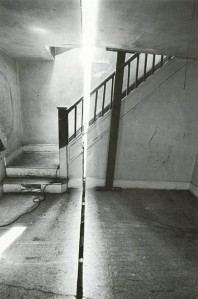 Of this new record Daniel writes that: “This is my folk record in a way. It is not musically obvious, but more in terms of how I approached the writing: A sense of sentimentality about home, about a place and time.” The drifting loops and blurred textures certainly don’t call to mind folk music, but they are very successful in evoking a kind of pastoral nostalgia, a sense of warm belonging and wonder that Daniel associates with the genre.

If Passageways is inspired by the feeling of folk music, his next major project takes classical music as its point of departure. A double LP of Debussy remixes will be released via the new Chicago imprint American Dreams, a track from which I’m honored to debut in this episode. 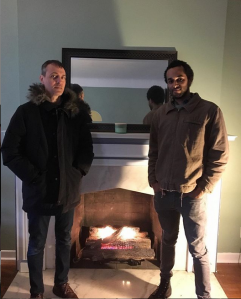 Jon Mueller and John Daniel, at the completion of a short tour together in April 2019

Tape and laptop have each played an important role in Forest Management’s sound since the beginning, as sources of production and distribution.  Daniel will often begin with sounds on the tape player and transfers them to Ableton Live, or vice versa, and back again. Initially he worked with MIDI instruments and effects patches, though more recently he has used incorporated a Yamaha DX7 synth passed onto him from a friend as a common sound source. Nonetheless, if Forest Management can be said to have an instrument, it is to be found in the nexus of the tape player and the laptop. Neither of which are “performative” instruments, certainly not as physical as the drums. For this reason, Daniel draws a distinction between his studio practice and his live performances, though he values both. Absent that gestural quality, Forest Management’s live shows put the emphasis on the unique qualities of each performance: the space itself, the material prepared especially for that event.

When, in 2018, Daniel’s laptop was stolen and then its replacement damaged after getting caught in the rain, this of course presented some difficulties. But it also inspired a fresh return to working with the Sony TC-200 reel-to-reel player, “an instrument that was an integral part of the beginnings of Forest Management.” The result was Slices, limited to just seven cassettes, and now available digitally on Bandcamp. That physical run was in part meant to reflect the theme of the record, a reflection on the fragility of life which Daniel recorded while convalescing from a surgery. Each tape came with a J-card affixed with fragments of autumn leaves. This handmade touch can also be found on display with Afterhours, Daniel’s most recent imprint. Afterhours isn’t his first foray into running a label. In addition to self-releasing much of his own music, Daniel runs Sequel, a label he launched on New Years Eve 2015.  He also co-founded the tape label Reserve Matinee with Michael Stumpf in 2018. Unlike those other initiatives, Afterhours maintains a very specific sense of place and of function: its handmade CD-R releases are designed to be distributed amongst Chicago’s late night club scene. While the digital versions are free to circulate more widely, the aim of the label is to refocus on the social experience of sharing music, in this case ambient music well suited to chilling out / coming down after a long night of dancing. I’ve wondered if and when CD-R labels would make a comeback, so perhaps this is an early sign of the format’s continued appeal.

For this episode, Daniel and I connected via Skype, he in his childhood home in Cleveland and I in Montreal. I’ve never been to Cleveland, and while I’ve spent a lot of time in Chicago (and have a good number of field recordings made there in my archive), it didn’t feel right to use them in this context.  So in lieu of field-recordings, this episode draws on excerpts from Chicago sound artist Norman W. Long‘s Electro-Acoustic Dubcology I – IV. I purchased this tape when it was released last Fall on Reserve Matinee, a label co-founded by Daniel after relocating to Chicago. Long’s approach to field-recording resonated deeply with my own sensibilities, and felt appropriate in giving some cohesion to this mix of sounds and discussions about site and place.

Thanks to John Daniel for taking the time to have this conversations, and to all the artists whose music I dragged into this free flowing exploration of time and space.