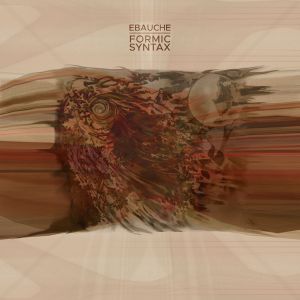 After two decades in the industry, you’ve released a breakthrough album and made multiple year-end lists, including our own.  What do you do next?  Play it safe? Record more of the same?  Go to Disneyworld?  Ebauche does something different on Formic Syntax, offering an album that is in part more aggressive and in part more sedate than Mutable: part industrial and part ambient. And it works.  On this album, the paintings of Adrianna Snochowska are the unifying factor, setting the mood for another mutable release.  The album was first released on Cosmic Winnetou, and is now seeing a wider release on Supple 9.

While we heard a host of influences on Mutable, we didn’t hear industrial.  But from the first moments of “Behind closed eyes,” something is bubbling beneath the surface, like a test tube heating up, unattended, ready to shatter.  When the beats begin to visit three minutes later, they sound like approaching behemoths.  The complexity of the track is apparent in the layering, as Ebauche (Alex Leonard) continues to pay great attention to sound design.  Will the tension burst?  Yes.  But when? 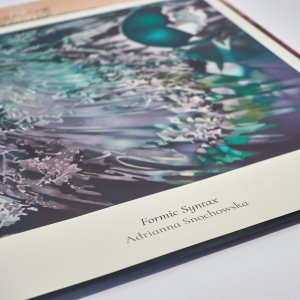 The public track “Bipolar refraction” begins with a boom before toying with expectations.  The piece unfolds like an IDM teaser: like the walk to a dance floor, but before the actual dancing begins. The drone influences that dominated Mutable are in full effect, elongated tones squaring off against truncated beats.  The more metallic shards sound like large machines powering down.  By the finale, all technology seems engrossed in an animated discussion, the foreground calm but the background hyperactive.  Giving in to his club muse, Ebauche allows rhythm to break through on the brief yet effective “Unmeshing cinematic realism,” channeling his inner FLA (and begging for a remix).

Just when we start to think the album is fully industrial (“Alcovic Arch” reading like a classic genre track title), Ebauche reminds us of his roots, returning to soothing tones on the album’s final tracks.  This will not surprise industrial fans, familiar with such switches on haujobb albums.  The album comes to rest on a giant cloud, easing the listener from aggression to contemplation: energy spent and nobody hurt.  By allowing an outlet for anger, Ebauche has done his part to promote peace. (Richard Allen)