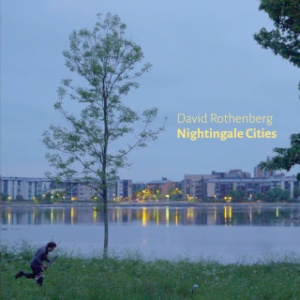 David Rothenberg is a musician with a calling: to hear, appreciate, and participate in the music of the animal kingdom.  A triptych of books on whale music, bird music and bug music has cemented his reputation.  In 2019 he returns with a defined focus ~ the music of the nightingale ~ and this time, he’s brought friends, who play everything from frame drum to laptop (playing the birdsong of the nightingales back to the nightingales).  Nightingale Cities is the two-disc facet of this release, while Nightingales in Berlin is the title of the book and film, all premiering this spring.

“The biggest thing is to not play ~ just listen.” says Rothenberg.  “Listen most of the time.”  The opening statement of the trailer sets us at ease.  It’s easy to dismiss the thought of interspecies music as fancy or hubris.  But if such a thing can happen, it begins with humility.  People have conversations with dogs, cats and parrots all the time.  So why not music?  Some claim that the difference in auditory systems prevents such interactions from happening, or that our music is merely tolerated or ignored by other species.  Others show that certain animals demonstrate a preference for certain types of music, or at east an aversion to others.  Rothenberg’s “Eleven Paths to Animal Music” elucidates his approach.  He thinks that he and his friends are performing duets, while realizing that this might be wishful thinking; yet he also apologizes for his earlier criticism of scientists, who are in fact attempting to prove his theories (while occasionally fighting over a single bird).

So let’s begin with a few basic assumptions: 1) Certain members of the animal kingdom might be willing and able to duet with humans; 2) Listening closely to the sounds of other living creatures increases our overall awareness; and 3) Even if the duets are never proven, the idea of the duet is enough, as Cymin Samawatie extols, to make us feel “connected … maybe even to God.”

The nightingale is capable of producing innumerable vocal phrases, many of which can be heard here.  While listening, one begins to anthropomorphize, thinking, “that part sounds like electronic music” or “is this free jazz improv?”  It’s not.  It’s birdsong.  But one may also connect the ability to that of a newborn human infant, whose vocal repertoire seems endless, and virtually impossible to imitate.  Different cultures reward different sounds with repetition, losing the ability to mimic what is not reinforced.  It’s fun to watch Rothenberg as he attempts to imitate the nightingale’s growl.  While clearly in love with the nightingale’s phrases, he calls them “weird,” but also admits that people have had the same reaction to his own music. 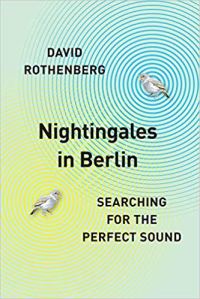 The full title of the book is Nightingales in Berlin: Searching for the Perfect Sound.  Such a search is clearly subjective.  A favorite sound is another.  When Rothenberg chooses one particular utterance as the nightingale’s “best note,” we know he’s winking.  In like fashion, he asks, “How can we tell if one soundscape is better than another?”  It’s a question we face here all the time, as we do choose to review some soundscapes and not others, then rank them at the end of the year.  But we know, as does Rothenberg, that our preferences are sometimes based on measurement (for example, the clarity of the recording ~ this one is pristine) and sometimes arbitrary (preferring dense recordings or sparse).

When listening to nightingales, one gravitates to one sound to another; when listening to a 140-minute collection of interspecies music, one prefers certain segments.  The cacophony at the center of “O Bülbül, Your Love” strikes this listener as the album’s best distilled explosion of joy, the beginning of “The Nightingales Are Drunk” the most relatable soundscape, due to the sound of passing cars.  On “Sisichak,” Rothenberg and furulya stumble into “a jam session of reed warblers” in Helsinki.  Lemke Lokk’s interaction in “Dreaming Slow” is convincing on its own, even devoid of context; and amazingly, it’s been caught on film (see below).  An exchange at the end of “Exit Music” humanizes the composer and his project:  “Making music?”  “No.”  Meanwhile, Rothenberg amusingly notes that the nightingale provides no indication of when one song (track) ends and another begins.

But perhaps the most affecting juxtaposition happens offstage.  On “Nightingale, You Are the One,” “finally, our bird can sing for himself, alone, no humans to trouble him.”  (The same approach holds true for “Sotavalka’s Satakieli” on Disc Two.)  At the same time, vocalist Samawatie is not allowed to perform in her home country of Iran.  Nightingales may sing loudly in order to drown out their competition; only humans attempt to silence others completely.  (Richard Allen)