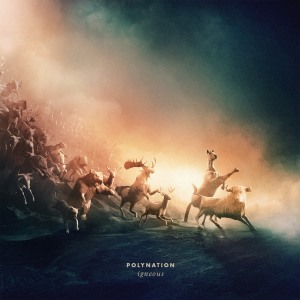 As we noted in our Spring Music Preview, it helps to have a awesome cover.  Polynation‘s alluring art is matched by immersive music.  Igneous is cinematic, exciting and funky, a fitting score to an apocalyptic stampede (as Hessel Stuut’s art suggests), perfect for pumping up fans before the big game.  This is the best sort of dance album, one with head as well as heart.  Stuut and Stijn Hosman are also preparing an audio-visual stage show; we can’t wait to see them live.

“Deluge” sets the tone, as wordless female vocals unfold over a series of advancing chords.  The piece operates as an overture, every part meticulously prepared.  Then the drums set in, and the setting changes, topped by a series of wet synths in the closing moments.  Such high drama is reminiscent of Dusted’s only album, When We Were Young, a story told with a blend of live and programmed elements.  Imagination is key.  Nearly every track has that little switch, in which the introduction of a new element increases the intensity.

Despite its title, Igneous is an album of rounded edges, so smooth that it’s easy to miss the complexity of its interlocking pieces.  The results come across as effortless, like a genius handing back a completed Rubik’s cube after only a few turns.  But listen to the layers, the patterns, the tiny shards of percussion, and one realizes that the Amsterdam duo has put great care into the construction.  The album flows as smoothly as a spring stream, yet possesses the power of a waterfall.

At the midway point (the beginning of Side C on the LP), the drama temporarily recedes.  This ambient interlude is like the last gulp at the water hole before the eruption.  The melancholic finale of “Animus” seems in retrospect like inevitability.  After this pause, the album continues its forward plunge, tipping down the cliff to “Toba.” As mentioned in our preview, this piece echoes the vast, wide-angle beauty of Gidge’s “Norrland,” another monster, career-defining track.  The bass swiftly sets the stage, the drums decorate the edges, and the synths spread throughout the track like a noble death, a doomed species making its last run, a bittersweet beauty in their demise.

Many artists set out to make concept albums and fail.  Polynation succeeds by keeping the story open, allowing listeners to form their own impressions.  We were drawn in by the album art (spoiler alert: it’s a lock for Best Album Covers), stayed for the music, and were amazed at how well they matched.  This is how to make a dance album in 2019.  (Richard Allen)