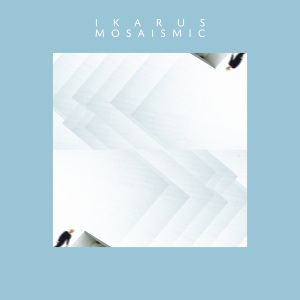 Mosaismic is an angular cityscape wandered through on chilly spring mornings, its buildings vacant and squares ghostly. The geometric intersects with the organic in these spaces, as morning moves through day and people submit to their day’s purpose. Each individual cleaves to their routine path. While these paths may be simple in isolation, zooming out to discern their totality reveals an ecosystem of baffling complexity and hypnotic flow.

It’s not often we review the work of a group with one pure vocalist among their number, let alone two. When we do, the vocals invariable add melodic depth without the distraction of clear lyrics (take Films, for example). What makes Swiss quintet Ikarus stand out is that their two vocalists adopt a wordless delivery more focused on rhythm than melody. This marries with a jazz instrumental trio with hardy rhythmic chops already, making for passages that convulse with polymetered jaggedness while sailing on smooth waves of groove.

With an all-acoustic setup of drums, piano and upright bass, Ikarus construct solid, grounded creations and then cast a range of evocative lights upon them. Deep, cold blues find their place in the set’s first third, as in the icicle notes that commence second track “Ounuamua” or the unsettling meeting of languid piano ostinato with syncopated vocal do’s and dah’s in the spacious “Saiko”. The hues turn warmer as the set develops, but never lost are the sharp edges and jolts that decorate the instrumental and vocal lines – the melodies that end an unexpected semitone lower or higher, the drum and piano lines that squeeze a reliable rest from the bar. On its surface, closer “Cirrus” offers the most calm and warmth of the whole set, but the still water belies an undertow just as mischievous as the rest. Ikarus are wonderfully deceptive, swaddling their aloof welcome with a soft, comforting cloth.

Such is the beauty of this rhythmically intricate yet discreet composition. Like a mosaic, the individual tiles are there to be fawned over by the meticulous, but stepping back into the crowd means can you admire the broader depiction. The concept of a mosaic makes up half the titular portmanteau Mosaismic (the other being ‘seismic’, as in the profound reactions that can result from collisions). It reflects how easily the five members of Ikarus are now fusing together on this, their third LP, while still allowing their individual voices to be heard. Listen to “Aligulin” ~ the vocals dominate the opening passage with a stilted melody of do’s, but in time the bass and piano join, respectively accentuating the awkwardness of the rhythm and providing harmonic warmth that smoothes over those very creases. It’s an intoxicating mixture that in time morphs into an almost danceable passage of scurrying drums and hammered keys, by the end of which the vocals have excused themselves, their salient contribution well served. Fused yet distinct.

The fusion applies to genre as well, with chief composer Ramón Oliveras (the drummer, naturally) as equally drawn to EDM as to jazz and minimalism. The former is most evident in the pounding “Subzero”, based on one of the most perplexing rhythms I’ve heard for a long time ~ and yet still, somehow, danceable. The greatest triumph of Ikarus of that, despite the rigid structures that bind them, these compositions flow. (Chris Redfearn-Murray)