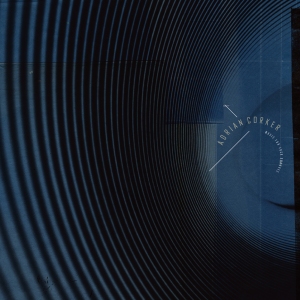 Without locked grooves (referred to as lock grooves on this release), our records would end with the grating sound of needle against paper.  Most locked grooves are silent, although many artists have used them to embed sound, most famously The Beatles on Sgt. Pepper’s Lonely Hearts Club Band and most memorably for ACL readers, GY!BE’s F♯ A♯ ∞.  (Now you know what the ∞ is for!)  And many artists have experimented with loops ~ in this case, 1.88 seconds for a 33 1/3 record and 1.33 seconds for a 45.  But seldom has an artist used the locked groove as a compositional base line.  Adrian Corker initiated the process in a pair of film scores, most recently The Have-Nots, and has now expanded the concept to an EP (on vinyl of course!).

For those who may be worried, here’s what the music is not.  This is not an EP of locked grooves per se, but one in which multiple locked grooves set tempo and texture.  Neither is this an EP of solely locked grooves, as piano, percussion, violin and voice are sometimes embedded and other times added.  And finally, this is not a repetitious EP, although it does involve repetition.  Corker’s tumbling juxtapositions make this less repetitive than much long-form ambience and club-friendly techno, in which one loop or drum may continue unabated, unaltered and unadorned.

Those who have ever discovered a locked groove on a record ~ or its common, annoying cousin, the looping skip ~ may have remarked on its musicality.  In the right place, or after a minute or so, the loop begins to sound intentional, like the sample on a hip-hop record.  For most people, this temporary fascination is followed by a desire to remove the needle (if this is indeed a locked groove) or to somehow fix the record (if this is a looping skip).  Corker heads in the opposite direction.

Corker recorded the grooves on acetate before feeding them into a computer.  The propensity of acetate to degrade ~ normally considered a liability ~ became a tonal bonus.  Then Corker opened the doors to Sam Wilson, Aisha Orazbayeva, Mark Knoop and Josephine Stephenson, who helped turn these tracks into something memorable.  There’s a hint of suspense in the discordant piano and fire extinguisher hisses of “Inflow Part 3,” but the overall impression is one of mysterious wonder.  The familiar vinyl “pfft” is present, producing a sense of nostalgia.  Rising chords nudge against needle clicks.  The track disappears and returns, sporting new energy of a different duration.  As the hisses return, noticeably louder, a giant drone rises like a behemoth.

“Outflow” unfolds in three parts on Side B.  The presence of a percussive sound in the locked groove makes the first seconds seem like the introduction to an electronic track, at 72 BPM the same tempo as Ariana Grande’s “7 rings.”  Playful percussion reigns in “Part 2,” along with a soft repeated beep.  In the finale, multiple sound sources engage in a stereo battle, like sunrise in a musical barn.  Our only quibble: it’s all too short.  But we’d rather have a release that’s too short than too long, and given the initial duration (under two seconds), this is the extended version.  (Richard Allen)