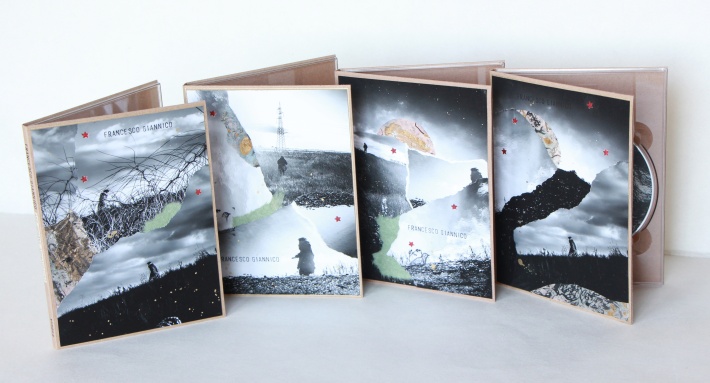 The sounds are delicate, impressionistic, a reflection of a stroll in the Italian countryside.  Francesco Giannico‘s photographs, now ripped and collaged, cover the case of the album.  Field recordings, now shuffled and enhanced, form the basis of new compositions.  Conversation and cutlery conjure a warm feeling on the opening piece.  As gentle rain falls, one can imagine the troubadour beneath a parapet, calmly waiting out the passing storm.

We’ve often heard Giannico in collaboration with his countrymen, most notably on Pagetos.  His solo works feature a delicacy we now recognize as his.  “Order and Disorder” sounds only like the first half of its title; not every sound is predictable, but every sound has its proper place.  The piano plays, a car passes by, twinkling electronics encase the scene like twilight walls.  The field recordings make the performance sound live, although we know it is not; no one can play all these instruments at once.  There’s a hint of the old Morr Music in the combination of guitar and chime: a nostalgic comfort. 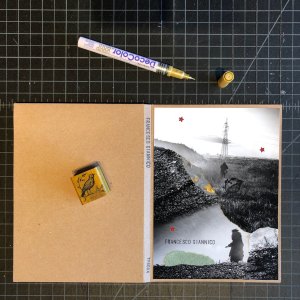 The recording is all about place, although the specific location is undetermined.  Time Released Sound makes reference to Giannico’s native land and suggests that listeners “will wish (they) were there, wandering in the fields, over the hills.”  When gentle wordless vocals arrive in “Hyades” (whose title refers to a star cluster), one can feel the undulating green beneath one’s back.  These are mondes imaginaires (imaginary worlds), unrestricted by geography.  To enter is to dream.

Not everything is as placid.  Midway through the album, the tone becomes more active, the electronics pushed closer to the fore.  The last 90 seconds of “Flammarion Engraving” are a bit of a surprise, but then again, so is the uncredited wood engraving for which it is named (pictured below).  Sure, it’s pretty (and many people have colored it in), but it’s also a dangerous thing to seek knowledge, to risk getting one’s head stuck between earth and sky.  The track plays off its predecessor, “Enuma Elish,” which refers to an ancient creation legend.  Below the surface, Giannico is performing a tricky feat, pulling the taffy of day from night, land from water, organic from electronic.  To compose is to create, but seldom have composers made such clear connections to the cosmic creation.  These slight unsettling bits ~ rustles against the grain ~ foreshadow “Annihilated,” although to be fair, few people would think of the final track as apocalyptic without the title.

In the end, the title yields a dual meaning.  Earth was once an imaginary world, called into being.  Today the creatures of earth imagine their own worlds, some realistic and some fantastic.  If we can imagine a peaceable kingdom, we might one day be able to make it a reality ~ with or without divine intervention.  This encouragement lies at the heart of Les Mondes Imaginaires.  In Field of Dreams, a baseball player asks, “Is this heaven?” and is told, “No, it’s Iowa.”  In like fashion, this album may contain Italian soil, but its sound is a product of the universe.  (Richard Allen)