This episode features a deep conversation with Toni Cutrone (best known as Mai Mai Mai) delving into all the various facets of his career. On the occasion of the release of his latest LP, Nel Sud, we met to discuss his southern Italian and Mediterranean roots, the rediscovery of Italian music from the 70s, and the difficulties (and joys) of running clubs and a cultural association in Italy’s capital. Cutrone draws an implicit link between the same eclecticism that is on display in the Roma Est neighborhood he calls home with the ancient links of circulation which unite diverse Mediterranean identities.
.
Nel Sud departs from where his Mediterranean Trilogy left off, exploring “the interrelation between pagan rituals and Catholicism, lives shaped by arduous labour and working-class dignity, the fragility of man subdued by nature, divinity and magic.” It stands as his most ambitious, and best, album yet and shouldn’t be missed. Amidst rising nationalism and right-wing populism, a work such as this all the more necessary: rather than solidifying a false standard of “purity” or advocating a fantasy of blood and soil, Nel Sud de-centers the received narratives, pointing to a long history of exchange and hybridization, of liminal spaces and fluid boundaries, of interlinked histories which cannot be contained by static understandings of identity. The music included here in this episode, much of which comes from Cutrone’s various projects and those of his collaborators, reflects this diversity, and while it tends, ultimately, towards a rather bleak picture (juxtaposing the ruins of past empires with the contemporary ruins of decadent consumerist society) there is nonetheless something I find hopeful. In excavating the past in this way, perhaps we can ignite new imaginaries and new futures.
.

I am a force of the Past.
My love lies only in tradition.

Episode 7: IN THE SOUTH

Sound Propositions should be available wherever you get your podcasts, so please keep an eye out and subscribe (and rate and review, it helps others who might be interested find us).  New episodes will be published every two weeks (more or less). You can support Sound Propositions on Patreon if you are so inclined. One of the rewards for supporting the podcast in this way is access to vocal-free versions of the episodes,  that is, more traditional mixes, as well as other benefits for higher tiers of support, including custom made mixes, soundscapes, and collages.
.

Born in Crotone, Calabria in the far south of Italy, that is, right in the middle of the Mediterranean Sea, it isn’t at all surprising that Cutrone’s art has pursued these tangled lines of flight. As a child, he lived in various areas across the Mediterranean, further cementing a sense of affinity as well as difference which has proven productive.  “I feel way closer to a Greek person or to an Egyptian,” Cutrone tells me, “than to, like a Swedish or a Danish, but that’s Europe and that’s Africa. But for me its more like the Mediterranean thing.” Cutrone’s own background living around the Mediterranean provides a personal touchstone through which to explore the fluid circulation of the past.

Mai Mai Mai’s “Mediterranean Trilogy” drew on these experiences and shared histories to produce a unique brand of Mediterranean-influenced dark electronic music. Each record took its title from characters of the Greek alphabet, beginning with Theta (Boring Machines, 2013), followed by Δέλτα (Delta) (Yerevan Tapes, 2014) and finally Φ (Phi) (Not Not Fun Records / Boring Machines, 2017). Each release was better with the last, with Phi a statement that made Mai Mai Mai a must-follow artists. Nel Sud is the logical next step, and delivers upon that promise.

Nel Sud builds upon an audio-visual project that Cutrone has been performing since 2016 with visuals by Simne Donadni. While his Mediterranean Trilogy gathered the strings that connected the past of Italy with Greece and North Africa and the Near East, Nel Sud does this more implicitly. Instead, it is a more explicit homage to Southern Italy inspired by the ethno-documentary films of Luigi Di Gianni, Gianfranco Mingozzi, Vittorio De Seta and Cecilia Mangini and the work of anthropologist Ernesto De Martino and ethnomusicologist Diego Carpitella, exploring folklore, magic, and music in the Mezzogiorno. Nel Sud repurposes sounds and images from these films into a dark pastiche, channeling the power of the past weighing down upon the present into a modern ritual. There is a sense of overlapping realities being violently merged together, as thundering beats anchor excursions through aspects of Italian culture far from the sunny tourist postcard memories.

Perhaps best known for his Mai Mai Mai alter-ego, Cutrone got his start as a drummer in bands including Hiroshima Rocks Around, Dada Swing, and Trouble Vs Glue. Outside of Mai Mai Mai, he is currently exercising his rock n roll soul drumming in the post-punk band Metro Crowd and a new performance-based project called Salò, after Pasolini’s infamous final film (itself named after the city where the Italian Fascist party retreated to in the final years of World War II). Beyond his work as a very active musician, Cutrone also runs No=Fi Recordings and has made a name for himself as an important concert organizer in Rome. His venue Dal Verme [“of the worm”] became an important node in the Roman and international underground music community, renowned for its great cocktails, and excellent Meyer sound system (both of which are very rare in Italy, particularly in venues specializing in underground music). In 2016, in the lead up to municipal elections, the club was closed by the city, which invoked a Fascist-era law to shutter the venue,instigating an international outcry. Although it reopened shortly after, things were never the same and the partners made the difficult decision to close the club in 2017, after 8 years in operation.

This closing was all the more tragic as Dal Verme’s rise coincided with the development of the Pigneto neighborhood in Rome as an eclectic center of cultural activity, from music to street art.  Rome is so often associated only with the historic center, with the ruins of Imperial Rome, the history of the Vatican, and the corruption of Mafia Capitale. Despite all of this, all the politicians and priests and diplomats and tourists, the center can feel, somehow, sleepy, and for decades has lacked a sense of contemporary cultural energy. In a city which, in the 70s, was a hot bed of contemporary art and experimental theatre and dance, of the Estate Romana, this was a sad state of affairs. The plucky scene of outsiders in the East of Rome signaled that things were perhaps changing. This scene bubbling out of Roma Est began to attract international attention, but it was a scene much more defined by a shared attitude emanating from a particular neighborhood rather than a distinct genre or style. No=Fi’s 2011 compilation Borgata Boredom is a brilliant snapshot of energy of those years.

None the less, journalists began to talk of Italian Occult Psychedelia, a term coined by Antonio Ciarletta in an essay for Blow Up magazine in 2012. Simon Reynolds and Valerio Mattioli posited the category as a kind of Italian analogue to Hauntology. Mattioli (a journalist probably best known to our readers as half of Heroin in Tahiti) finds that Italian Occult Psychedelia “avoids the eerie and pastoral feeling of the English counterpart, as well as the pop-cheesy attitude of the American hypnagogic pop. On the contrary, their music is blatantly dark, esoteric and sometimes bloody.” This music emerges just as young Italians were rediscovering the remarkable body of work produced in Italy in the wake of 1968, drawing connections between psychedelic prog rock, avant-garde composition, free improvisation, “ethnic” music, library music, and film soundtracks. The flood or reissues and pirated music allowed these various styles to be perceived as a kind of canon, a genealogy, to inspire a generation again in upheaval.

While IOP shouldn’t be strictly conflated with the scene in Pigneto, there is some overlap and IOP did find an important center in Dal Verme, which hosted the THALASSA festival, one of the key meetings of artists grouped together under this heading. Cutrone’s label No=Fi also released The THALASSA Tapes compilation, the closest IOP has to a statement of intent, as well as records by many artists who might fall under that banner. 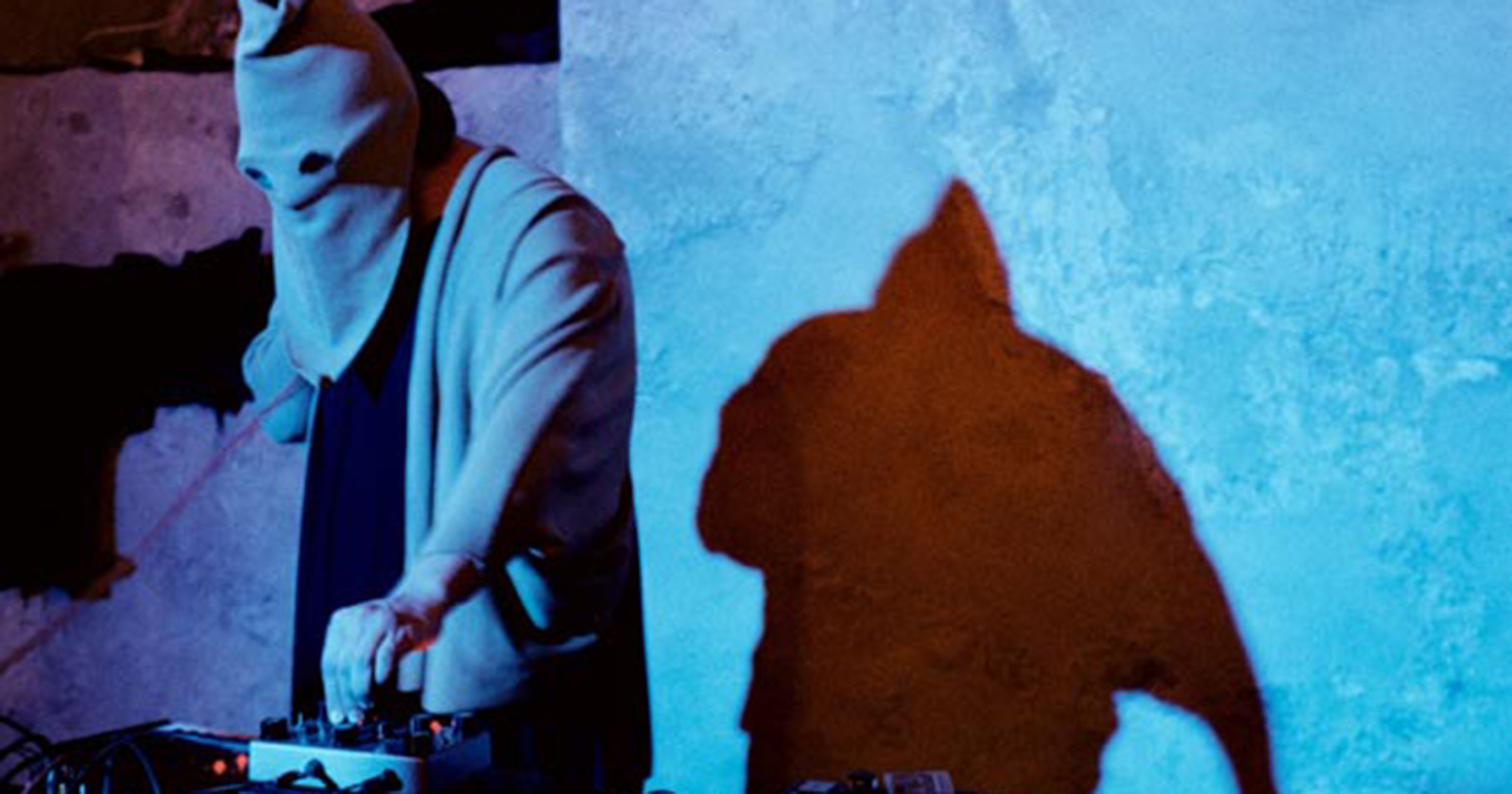 These scenes, the eclectic one which coalesced in Pigneto and IOP, were nurtured by geolocated spaces and labels.  All of Cutrone’s activities speak to this kind of nurturing connectivity.  Mai Mai Mai’s music is made by Cutrone, often incorporating samples from ethnographic recordings and films, but Mai Mai Mai, whom he speaks about in the third person, is not solely the fruit of Cutrone’s imagination. Visuals are an important part of the project, with costumes for the ritual made by Canedicoda and live films made by Simone Donadni.  Collaboration runs through all of Cutrone’s work, and its not for nothing how often he invokes his network of past and present collaborators.

Following the closing of Dal Verme in 2017, he joined forces with Nero Editions for a new venture know as La Fine [“the end“].  The first year’s programming occurred in an old theatre in the center of Rome. Since last October, La Fine has been based in the Music Inn, in a piazza on the Tiber River, just across from the Vatican. As he explains in the interview, the Music Inn was a legendary (and sleazy) venue for jazz in the center, drawing another point of connection between what they are doing now and a particular vision of Rome’s past.

Nel Sud is not his only new LP in 2019.  In March, Metro Crowd released their sophomore record, on which Cutrone plays affected drums and contact microphones . Metro Crowd’s post punk vibe has a distinct sound and attitude from Mai Mai, yet its energy is sure to appeal to fans of Toni’s work.

Since I’ve been based in Napoli I’ve taken advantage of the proximity to Rome. While in town to see a Gordon Matta-Clark retrospective at the Accademia di San Luca in February, I met Toni in his home in Pigneto to talk about his upcoming album Nel Sud.  I’d been to his previous venue, Dal Verme, before, and was pleased to be attend the soft opening of his latest venue last October, a concert featuring Mike Cooper and others. La Fine at the Music Inn is a return, so to speak, to the center of Rome, and underscores the evolution of Toni’s musical journey.

This interview was recorded in February at Toni’s home in Pigneto, includes some live audio from a performance at La Fine in March, and, fittingly, was produced in Calabria and Pigneto in June.

FIELD-RECORDING – “I am a force of the Past!” Pasolini scene from “La Ricotta”