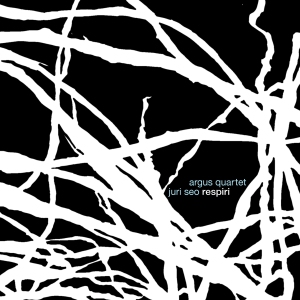 Interrelation is at the heart of Juri Seo’s Respiri, the connective tissue that binds all those things we think of as separate or incompatible. Classical and avant-garde, simple and complex, warm and cold, tonal and atonal – the list goes on, and while this in itself is not exactly an original position, Seo’s innovative approach makes the distinctions between those things a border instead of a chasm. In it, the old and the new mingle, creating familiar-yet-unknown forms, establishing a fluidity that is relatively rare in the world of attempting to bridge apparent opposites. “Respiri”, the first track, is an homage to the late Jonathan Harvey, whose compositions, like Seo’s after him, tend towards the questioning and dissolution of fixed, strong musical identities. His Buddhism led him to make musical analogies of meditative states that are not underpinned by the Cartesian body/mind division, and which are therefore full of bodily references. One of the most important is breathing, which Seo takes as the theme for the first track, that simple, yet mind-stunningly complex, connection between inner and outer life. The resulting music is full of expansive harmonies as much as it is of small-scale expressive melodies; there is a certain sweetness to the many moments of silence that the piece is built around, its rhythm an organic variation that placidly ends with tender dissipation.

This (un)easy border between life and death is perhaps the background of the dense, almost lonely “Suite for Cello” (played by Joann Whang), whose five pieces – a classical structure – continually mutate from one emotional state to another without sharp distinctions. Like in everyday life, very different feelings happen simultaneously, or one after the other without necessarily having ended, revealing the supposed unity of the mind as an illusion. The cello here sometimes moves incessantly, almost anxiously, through soft musical phrases, only to grow loud and stable, transitioning from fragment to whole and back again without as much as a hint of the end of whatever came before. The classical structure of the suite, made up of distinct but connected dances in which something always clearly starts and something always clearly ends (corresponding to the rules of the dances themselves), is here individualized, fractured into the sweep of ‘modern’, rule-ignoring dance. In this sense, it feels like a very personal piece, like all those thoughts and feelings that swell and fade constantly into both the mind and the body, their distinction merely a zone in which they all come to relate.

The album ends with the “Infinite Season” string quartet (played by the Argus Quartet), which makes those transitions much more obvious: the first piece is named “Winter-Spring”, the second “Spring-Summer”, and so on, until the cycle is complete. Each of these seasons, in themselves, mean little, and acquire their true complexity only in relation to each other. Life and death are both sad and happy, integration and re-integration into the world, their border an expressive flux of classical flourishes and modernist stridency. It is that tenderness at the end of the Jonathan Harvey memorial, sometimes a simple feeling for a complex event, sometimes the other way around. Like the animal sounds of the strings in part II, that give way to absolute silence, it is an infinity of fragments that is also an infinite whole, the stormy atonality of part III a noisy synthesis of both. The quartet closes peacefully, almost silent, ready for the agitation of the new cycle.

It is without refrain that I can say that Seo has mastered fluidity, the easiness of transition between poles that would seem irreconcilable. If you’d ask me where the border between all those things was, I’d say it’s everywhere, at all times, and it’s not made for division, but for connection. (David Murrieta Flores)