moltamole ~ ° and so we heard them melt

When it comes to confronting climate change, Copenhagen’s moltamole goes all in.  After writing a thesis paper about the aural aspects of the subject, she traveled to various locations in Greenland and Iceland to record the sound of melting glaciers.  ° and so we heard them melt puts her in the company of Zürich’s Institute of Landscape Architecture, whose expansive project Melting Landscapes was one of our favorite albums of 2018.  It’s sad to think that we’re only a few releases away from a new sub-genre. 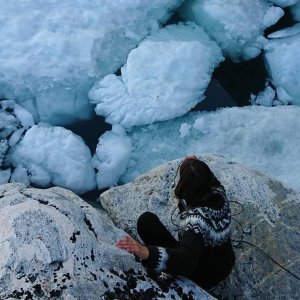 The dedication of researchers and soundscapers helps to keep the challenges of climate change in the public consciousness.  While climate change deniers occupy the highest office in the United States, glaciers continue to melt and extreme weather continues to proliferate.  moltamole is on the frontlines, doing crucial work.  But this is not just an environmental project; these sounds are fascinating.  In “Sermermiut,” light wind is joined by creaking ice, which sounds remarkably similar to an un-oiled door or a hungry baby bird.  “Sermermiuttl” folds in the sound of passing traffic, calling attention to what the artist calls a new industry: tourism sparked by the “glamorization” of climate change.  All this occurs while sheets of ice seem to fall in the background.  A terrible question is raised: if tourism results in the increased pollution of an endangered habitat, but raises funds for its preservation, is it more helpful than harmful?

A video component affords the listener to be a viewer as well.  Not much happens in these videos, although one might make the counter-argument that everything happens.  The images of Jökulsárlón (South Iceland) are particularly engrossing, as the remnants of glaciers seem emaciated: not the full, gorgeous sheaves used by the tourist board, but a stark reminder that the lagoon may one day be only water.  Paired with the hydrophone recordings, they produce a feeling of loss, nearing despair.  In its infancy, the field recording genre was associated with “pretty” sounds, reflections of nature, a new age vibe.  In its adolescence, the genre began to capture endangered sounds, not always aware of their rarity: an Amazonian jungle, later clear-cut; an island community, eradicated by floods.  Today, the genre is laden with emotional and political weight.  No field recordist wants to write aural obituaries, and yet many end up doing so.  How long will Disko Bay sound like it does here?  Will the wildlife of Heinabergslón survive?  moltamore’s sonic snapshots offer open-ended questions, leaving the responses to her audience.  If we listen passively, nothing will change.  (Richard Allen)

Tags: ° and so we heard them melt, moltamole, Richard Allen