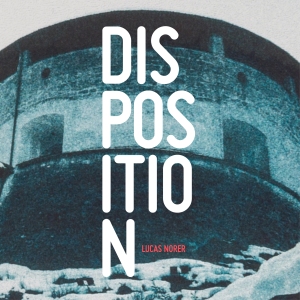 Disposition is a political work that seeks to depoliticize, an abstract work that seeks to upend old associations. Available as a softcover book with USB card, the album castigates the co-opting of the Kufstein Heroes’ Organ while celebrating its tonality.  Essays (in German and English) explore the organ’s history while providing pathways to reevaluation.

This poor organ, rapturous and reviled, the seat of so many political projections!  The contentious discussion is not the fault of the world’s largest open-air organ. Built in 1931 as a nationalist memorial, it combined the ritualistic overtones of church with the secular themes of racial and cultural identity.  During the second world war, the organ bolstered themes of Nazi purity, at its nadir being forced to exude a Christian hymn whose words had been rewritten to extol allegiance to the Führer.  Today the instrument plays daily at noon, filling a space previously occupied by church bells, devoid of context yet still suspiciously völkisch.

Disposition is a challenge: a small challenge, to be sure, but resolute.  The title refers both to an organ’s stoplist and a German expression which means “to call something into question.”  One might expect this to be an “organ album,” but it’s not; Lucas Norer‘s work operates as an intense soundscape.  We do hear the Heroes’ Organ, but we also hear Norer’s “software-based home organ emulator,” offering tunes less somber, less mired in uncomfortable allusion.  Church bells rediscover their cherished sonic space in “Proposal for a Monument,” becoming integrated in the following piece.  Birdsong wraps the arrangements in natural sound; conversational snippets ground the soundscape in quiet dialogue.

In the wrong hands, music can be used as a weapon.  One need look no further than the use of heavy metal as sonic warfare.  Music can be used to unite an audience, or to ignite rifts.  Yet shorn of lyrics, music is neither menacing nor benign; the interpretations shift in different contexts.  One citizen may welcome the booming sounds of the Heroes’ Organ on a daily basis, thinking of community, history or home; another may endure it as one would the piercing screech of a passing emergency vehicle.

By recording the sounds in and around the organ as well as the organ itself, Norer offers an alternative to the daily demonstration.  What was once a weapon might one day become a symbol of reinvention, in the same way as the dedication (after much back and forth) has landed once again on “all victims of war.”  One wonders, given the recent rise in global xenophobia, how long this new dedication will last.  “Music in the Winds” fades from organ tone to sonic art, opening a new window.  Might artists such as Clarice Jensen be invited to perform their own compositions in lieu of the daily program, investigating the sonic possibilities inherent in the instrument?  Might the disposition change?  The extended tones of “Register” and the gorgeous closer “Last Movements” suggest a reclamation not only of the Heroes’ Organ, but of organs in general: detached from ecclesiastical and political associations, finally freed to be themselves.  (Richard Allen)