In the digital age, we rarely stumble across a sonic surprise in a physical package, but when we do the delight is palpable.  This is the case with Seconde Nature, which comes from the same source as the mesmerizing Acoustic Cameras.  The outer package gives little indication of the wonders that lie within: a Flexi-disc, a USB card, three booklets (in French and English) and a sense of discovery.  We’re pleasantly disposed before we’ve read a single word or heard a single sound.  Have the holidays come early?

Last week, the World Resources Institute reported that seventeen countries representing a third of the world’s population were facing a severe water crisis.  One of the recommendations: cleaning lakes, wetlands and other waterways.  This is the subject that is addressed by the researchers of this project, focusing on Normandy’s River Orne, which flows to the English Channel.  Can the Orne be restored to its former “purity,” and if so, what might this restoration entail?

Our recommended mode of reception: look, listen and read.  Jana Winderen‘s The Listener makes an ideal backdrop.  The piece is an amalgamation of hydrophone recordings from the Orne, quiet at first, eventually ending at the shore.  Winderen writes that the presence of “specific underwater insects” allows researchers to determine how polluted a source may be; some are predisposed to perish, others to survive.  The sonic chaser is Thierry Weyd‘s incredibly rich “Ondes incidentes et ondes réfléchies / Incident Waves And Reflected Waves,” recorded at the Gosselin Factory astride the Orne.  Flowing water is never far afield; nor are the perky chirps of birdsong.  The short piece builds to a snatch of poetry, Kenneth Patchen’s “Little Birds Sit On Your Shoulders,” English translation below.

Here we find a microcosm of the project: nature and humanity, purity and evil, the choice of escaping or engaging.  Should we do nothing, and simply listen to the birdsong?  Or to zero in on this project in particular, to hear the sounds while ignoring the words? 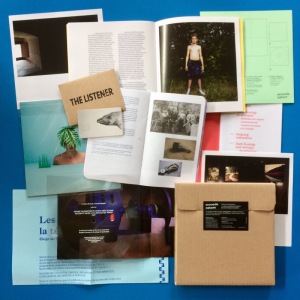 The poster “To Rock the Boat Head First” begins, “Research is an ideal climate for reflection.”  This is exactly what happens in Agnès Villette‘s booklet, which includes a series of enticing photographs and takes place against the backdrop of a lost cat.  Villette wants to avoid any images that hearken back to André Hardy’s paintings of idealized nature, preferring to capture the Orne of today.  Doing so requires some contemplation, even wrestling.  A group of children are swimming in the river.  Is it safe?  No one seems to know, but they are doing it anyway.  Villette recalls her own childhood: idyllic trips, glazed by nostalgia.  The word “Orne” means “bend” or elm; many of the elms have died of disease.  But the river is a product of other forces as well: pollution, rerouting, dams constructed and closed.  Invasive species stake their claim near the banks; Villette spraypaints one of them, creating an unusual contrast.  Referencing Timothy Morton, the author introduces the concept of Dark Ecology, admitting that we cannot “aspire to return to a primeval nature, as it was just an imaginary constructed idea;” but that this should not restrain us from revitalizing ecology, as reflected in the project’s subtitle:  Nature and renaturation, a sensory overview of a history of changing watercourses.

The topic of Dark Ecology is further illuminated in a booklet of Short Essays by Camille Prunet.  She compares the “erasing” of a local dam to attempts at art restoration, asking “Can one restore without degrading?”  The whole concept of “putting things back the way they were” is called into question.  Might the new coverage of seeds attract different bird species (even if they were the “original” species), who might then eat the Corixa right out of the river, so that Jana Winderen could never capture their sounds again?  Or in Prunet’s words, “What does it mean to ‘protect nature’ when nature itself is in a constant state of change?”

As we listen more, we begin to extract the sounds of what we perceive to be different aqueous creatures, not only members of separate species but particular characters within the pack.  We now understand the trajectory of Winderen’s piece: for sixteen minutes, she amplifies the sounds that normally go unheard by human ears, exploring the “expected” sounds only in the finale.  As one gazes at the surface of a river, one rarely imagines the biodiversity within.  The same holds true for political views: people often adopt positions based on their surface characteristics, ignorant of the nuance that might challenge them.

Weyd mirrors the discussion by humming Patchen’s poem.  Thanks to this intentional intrusion, the field recording is now a soundscape.  Depending on one’s viewpoint, the “natural sounds” have been augmented or abraded.  Should the poem be excised, something will be lost.  Is it better to “rewild” the track?  Or are neither nature nor industry inherently good or bad?  If so, the question becomes one of responsibility.  We may be paralyzed by the fear of doing something “wrong,” but our inactivity may lead to a place where “nothing more is right.”  (Richard Allen)