Them Teeth ~ Sun of serpent, moone of cipher 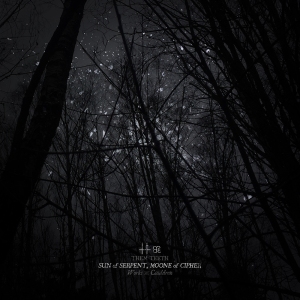 It’s not Halloween yet, but we have our first spooky contender.  With the weather as nice as it has been lately, I had to wait for a dark, foggy, humid day to review it.  Them Teeth produces the perfect sort of music for these sort of conditions: claustrophobic, menacing and drenched.  The fact that the duo hails from Gothenburg, Sweden only adds to the folkloric connection.  Even the fonts are gothic.

Sun of serpent, moone of cipher is the second part of a trilogy that began with 2016’s Auditory Witchcraft, and as such hearkens back to Shinjuku Thief’s Witchcraft Trilogy of 1993-2002, with foreboding atmospheres and ritualistic rhythm.  The only thing we’d change is the sequencing.  We’d place tracks 7, 4, 5 and 3 on Side A and 1, 2, 6 and 8 on Side B.  In this lineup, the heavy tracks sink to the bottom while the light(er) rise to the top, allowing for a slow build followed by an uninterruptible pagan ritual; musically speaking, drone on Side A and dark folk in the manner of Bohren and der Club of Gore on Side B.

Drone and rock make comfortable bedfellows, despite the fact that they usually occupy separate rooms.  In “Moeter Niht,” one can hear the whispers beneath the floorboard, reminiscent of those in the classic film “The City of the Dead” (U.S. title “Horror Hotel”).  The whispers persist even as the guitar plays.  Three minutes in, the first drone appears, drawn across the mind like a curtain of fog.  The sleeper is falling under a spell.  “The serpent did verily speake” hearkens back to the book of Genesis, announcing the narrative arrival of sin.  Now there are rustles among dark dreams, even thicker in the subsequent piece, erupting at 1:33 with outcaste drums, quickly followed by moans.  There’s no doubt witches are about.  On “Faerum, hexenhammer,” the moans morph into song, the spell coalescing in fiery rushes of static offset by acoustic guitar and a steady, foreboding beat.

Now let’s consider an alternate manner of listening.  In its original form, Sun of serpent is bracketed by its deepest pieces, serving as overture and fulfillment.  The opening tracks not only set the stage, but demonstrate what the duo can do.  The gong of the opener is a call to arms, the timbres recalling Led Zeppelin’s “Battle of Evermore,” another folk piece from an album including mystical symbols.  The rock aspects spill forth on “Haegtes, burn the trees,” which contains an instrumental chorus, as does album highlight “A knight genihtian, under earth.”  Have we been lulled into a false sense of security, or are the witches more benign than we thought?  The kicker is that the darkest historical evil was not witchcraft, but the persecution of alleged witches: mass murder prompted by irrational fear.  Them Teeth preserves both angles, tying them in a knot by returning to the album’s earlier themes in the powerful closer.  We’re already looking forward to the third installment.  (Richard Allen)