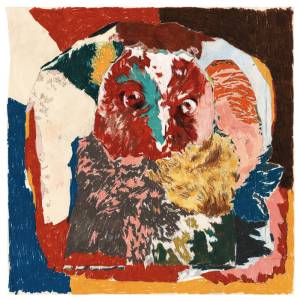 Valentina Magaletti and Julian Sartorius’ first collaborative record begins with the frantic, indiscernible rattling of high-frequency objects fighting for space atop a series of damp thumps. Over three minutes these thumps align as the two drummers clack, rattle, and stomp into a ritualistic, processional space. The sounds and rhythms throughout Sulla Pelle evoke something deeply communal that extends beyond the musicians and their chaotic technical prowess. Their mysterious synchronicities feel foreign in one instant and comfortably recognizable in the next.

Recording with Malcolm Cotto of The Heliocentrics, the duo improvised on a single drumset and accompanying, oftentimes unorthodox, percussion. The resulting four tracks synthesize the two drummers’ styles and the smorgasbord of instruments into one organic, complicated unit. Opener “Soboka” introduces this rhythmic density with splashy hi hats, mouthfuls of snare hits, and washy, modulated effects. These arrangements never stray from the foundational time signature or tempo, but their ineffable world-building atmosphere eradicates any typical association with machinery or rigidity.

The title track draws attention to the human aspect behind these uncanny compositions with scattered studio chatter, while “Micro Tormento” emphasizes the repetition and hypnosis of drum patterns. Yet neither piece compromises the willful suspension of disbelief that allows one to believe that these are somehow already existent in nature as abstracted, internalized rhythms. For all its trickiness, Sulla Pelle feels approachable to even the most uninformed listener. To get lost in the mesmerizing, circuital “Micro Tormento” is to engage with the record at its most fundamental.

The technicality is not to go under-appreciated. Magaletti and Sartorius know how and when to pull the curtain on their process and combine their music-making appendages into effortless oblivion. Occasionally the studio mixing jumbles into the acoustic drumming, adding to the heart stomping forwardness of the cacophony: two individuals pounding on metal and skin, as exemplified by “Tre Porte.” This piece downsizes the album’s vision into a short exploration of ad-libbed, dissonant harmony that floats in and out of decipherability. Even at their loosest, Mageletti and Sartorius are “locked in” both with each other and a more universal feeling of connectedness. Sulla Pelle suggests that confusion and clarity are both central to this connection.  (Josh Hughes)