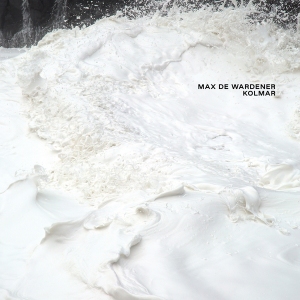 The music of Max de Wardener is impossible to pin down, as he gallops between instruments and styles.  This makes Kolmar an intriguing listen, with enough ideas for two releases; and it could be argued that it should be two, as the differences are so delineated.

The artist has already addressed this with the summer release of the Palindrome EP.  “Palindrome” is easily one of the album highlights, although it’s 4:24 on the album and 9:58 on the EP.  It’s a perfect driving song, hypnotic yet ever-changing, with layers of percussion tumbling through the sonic field.  Synths dance, cymbals crash, and the song keeps jumping to higher levels like a video gamer.  While taking the form of techno, the track is at times so minimal that one wonders if DJs are tempted to mix it into another track; if so, the more the merrier.  On the EP, the track is followed by the seven-minute “Sun Dogs,” a tempo-driven synth piece that virtually vanishes in its second and fifth minutes, re-emerging with escalating taps.  While “Sun Dogs” is not on Kolmar, digital buyers can put it there; at 49:19, the album proper has plenty of room.

Where should one head from here?  The logical place is the title track (and first single), which arrives in two parts, track and reprise.  Again de Wardener advances and retreats, extending the interest through dynamic contrast.  The bass of the reprise betrays one of his influences (Bladerunner) and heightens the tension: just like a sci-fi film.

So let’s pause for a moment to take inventory.  It would be easy to pigeonhole de Wardener as a techno artist, based on the focus tracks.  But to his credit and detriment, he’s more than that.  The credit part is easy, as he demonstrates great depth and diversity.  The detriment is that those who enter for one type of music may be dissuaded by the others.  For example, this isn’t the type of album that one can play in the car if one wants to remain hyped.  There’s too much introspection around, along with some very quiet spaces.  This is apparent as early as “Amber,” a lovely ambient piece for the first half that turns darker in the second.  We learn that de Wardener is not just a Buchla enthusiast, but also has a taste for older instruments: ondes martenot, Cristal Baschet, glass harmonica, pitched pipe organ. Sometimes these combinations lead to pulsation (“Free Radicals”), but other times they don’t.

Listeners should be prepared for some thoughtful, experimental pieces, such as the theremin-esque “Wraith,” a mournful piece that sounds like an elegy for a specter; the playful “Prelude” (which one leans in to hear) or the self-explanatory “Two Chords.”  Some may feel that they are wading through these tidal pools to get to the waves.  And there are more waves: the one-two punch of “Merricat” and “Palindrome,” the latter track splitting the difference between groove and experiment by serving as a mirror image of itself.  But consider a pair of EPs, one featuring tracks 1,  3, 4, 5, 7, 8 and 12, the other tracks 2, 6, 9, 10, the extended 11 and “Sun Dogs.”  Now we can appreciate the artist’s artistry even more; the talent is there, it just needs a little tidying.  (Richard Allen)