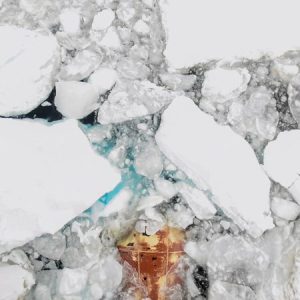 Today we shift from the best music of the 10s to the first music of the 20s.  This one is our biggest Winter Music Preview ever, listing nearly 200 albums in five days!

A new year starts with new hopes and new dreams, as we try to leave old fears and anxieties behind.  There’s nothing like ambient music when it comes to soothing the soul.  We’re going to need a lot of hope this year; we’re going to need a lot of strength.  And so we thank every artist, no matter what the genre, for continuing to create new and vibrant sounds, conjuring goodness out of silence.  While other parts of the world seem to be stagnating or stumbling backwards, the artistic world continues to stride forward, offering a comforting and necessary balance.

Our cover image is a still shot from Esther Kokmeijer’s Stillness, Brash Ice, Pack Ice, Growlers, Bergy Bits and Icebergs, whose score was composed by Machinefabriek.  Read on for more!

Rich’s Pick #1:  The Alvaret Ensemble ~ Ea (laaps)
It’s been a long, great run for Matthias Van Eecloo’s Eilean label, which fulfilled its mission at the end of 2019 with its 100th release.  As the new decade begins, the artist is preparing to launch a new label with the same creative team.  The first laaps release will arrive this January from The Alvaret Ensemble, a quiet “supergroup” featuring Olga Wojciechowska, Greg Haines, Joana Guerra, Sytze Pruiksma and of course Jan and Romke Kleefstra!  Our anticipation is high, not only because we’ve been waiting for new music from the ensemble, but because we’re excited about the mystery of the new label!

Rich’s Pick #2:  Machinefabriek ~ Stillness Soundtracks II (Glacial Movements, January 24)
The artist’s second team-up with photographer Esther Kokmeijer seems even more relevant than ever before, as glaciers continue to melt and the ocean continues to rise.  The first collaboration appeared half a decade ago, and by now we thought we’d see more movement on a global scale; the fact that we are deadlocked (and in some cases regressing) lends urgency to the project, keeping our minds fixed on a clear and present danger.  As before, the music is languid and beautiful, the visuals astonishing. 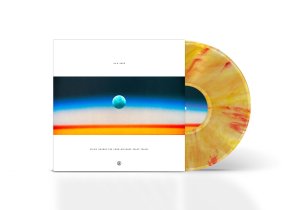 Rutger Zuydervelt also pairs with Bill Seaman this month on Movements of Dust, a pensive collaboration that is offered in a special “polyvinyl chloride edition” with a sleeve made from floor tiles.  Shipping costs may be an issue, but the music is sublime, with light beats factored into the needle-soaked ambience (Oscarson, 4 January).  Aiden Baker & Gareth Davis had some success with their Calvino tribute two years ago, and now a sequel is in the works.  Invisible Cities II is out January 24 on Karlrecords, and showcases the calmer side of each composer. zakè & City of Dawn team up for the year’s first album, Wander, released on New Year’s Day on Zakè Drone Recordings, after which 36 & zakè unveil two albums on January 24.  Stasis Sounds For Long-Distance Space Travel is peaceful, tranquil, and yes, spacious; the companion piece Extended Hypersleep Programs & Reductions includes a quartet of “accompaniment programs,” each followed by stripped down variations (Past Inside the Present).  PITP also has a release scheduled for today: the calming Fieldwaves by Low Howl (January 3). 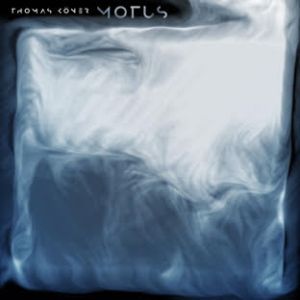 Thomas Köner may be known for glacial ambience ~ but he “dreams of a dance floor where Motus would be enjoyed.”  The new album seems tailor-made for the old chill-out rooms, but we’re not sure how to define the modern equivalent.  It’s great to have him back (Mille Plateaux, February 6).  Another returning favorite is Celer, who once upon a time seemed to be releasing an average of an album each month.  He’s slowed down his pace since then, but catches up to date with the four-disc Future Predictions, which is a companion piece to 2018’s Memory Repetitions.  Recorded on reel-to-reel, the set includes a quartet of longform tape loop pieces that ebb and flow as they unwind (January 2).  Images are shown just below the stream. 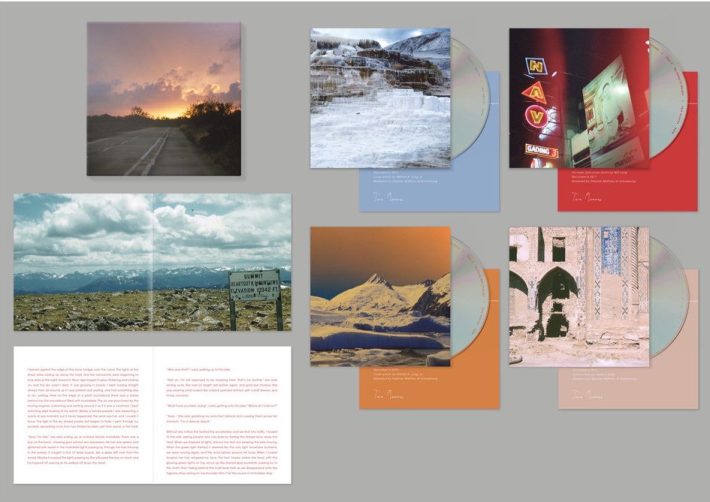 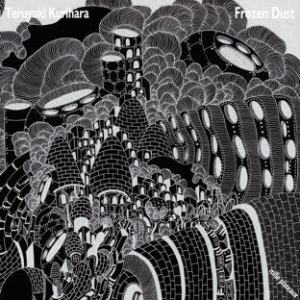 The gentle Jason Calhoun (naps) returns with the suspended sounds of Jedediah.  Field recordings lend the project a tactile feeling, as if one is strolling through the forest to collect signs of solace (Dear Life, February 14).  On the opposite hemisphere we find Frozen Dust, a cold album from Teruyuki Kurihara.  Each track tells a new story, from a widow in mourning to a lost Arctic adventurer (Mille Plateaux, February 27).  Singing bowls, bells, gongs and soft chants produce a Zenlike atmosphere on Dream Interpretation, a meditative set from Kazuya Nagaya.  The artist resides in the Japanese Alps, where winter can look as bleached as the vinyl on which this LP is pressed, producing an effect akin to white paper, filled with promise (Sci + Tec, January 23).  Chihei Hatakeyama‘s Illusion Harbour is another restive release from the prolific composer, this one on Subcontinental (January 31).  Rain and birds land atop static and keys on Boris Salchow‘s Stars, reflecting his film background.  The album follows a loose story arc, but leaves the details up to the listener (Puremagnetik, January 21). 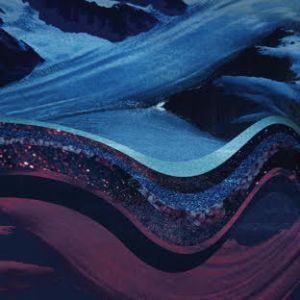 AKB‘s spacious electronics recall the classic age of ambience.  Marianergraven investigates the depths of the Mariana Trench, and its slightly claustrophobic feel makes us think of the creatures in Aquaman (Lamour, February 28, pictured left).  Ambient Fields returns this February with the electric guitar album Olafsfjordur, its title referring to its genesis at a music residency in Iceland.  Phil Moffa releases two albums on January 1, totalling five hours of music: two and a half hours of ambience on Meditations for Peace and a matching amount of noise and abstraction on Pieces for Painting.  Let’s call this the artist’s yin and yang (Butcha Sound Records).  Is the new age better than the old age?  We’re about to find out.  Leo Takami embraces the tag with guitar album Felis Catus and Silence, a throwback for old Windhill Hill fans (Unseen Worlds, February 28). And Iceblink embraces the season with a “bedroom new age album” that includes flute, saxophone, nylon guitar and synth; Carpet Cocoon is out February 28 on Moon Glyph. 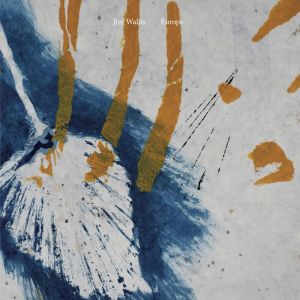 Jim Wallis‘ lovely, piano-led Europa is the score to the film of the same name, about an asylum seeker who commits suicide.  Such a topic deserves the tender treatment, which is what Wallis offers, wrapping ivory notes in soft blankets of strings (Tip Top Recordings, January 31, pictured right).  Capitalizing on the October debut An Orchestrated Impulse, Matt Pond and Chris Hansen return in January with Scores for Made and Unmade Films.  Two of these films will premiere at New York’s Museum of Modern Art this January; H20 is the extended sneak peek.  Jordan Reyes’ Fairchild OST + Borderland EP is a different animal, filled with synths that occasionally drift into menace (“Broken Crown”) but until that point score the liminal life of highways and hotels.  The combined projects are available as a single release (Whited Sepulchre, February 28).  The music found on Garret Harkawik‘s Doom Vibrations sounds different from what one might expect from the title.  Some of the tracks are purely ambient, while others make fine use of chime tones.  The documentary it accompanies traces the ten-year quest of a man to find the hidden source of a sound only he can hear (January 21). 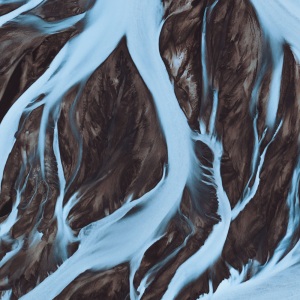 There’s a little bit of dub right in the middle of Joachim Spieth‘s Tides, but apart from that, it’s all ambience.  The album possesses a gentle, yet unstoppable forward motion, like its namesake (Affin, February 15).  Miguel Noya produces a particularly lively brand of ambience, marked by MIDI recordings and a whole lot of synth.  His textures sing of Latin America and inspire colorful images.  While listening to Canciónes Intactas, one may occasionally wish to dance ~ especially when one encounters the percussive textures and brass timbres of “Inoculación,” the collection’s most immediate piece (Phantom Limb, February 14).  Pulses and percussion also decorate Everything, the new synth-based album from Ocoeur (and the second prominent ambient album to bear that title in recent memory).  But it all recedes for the two ten-minute closing tracks, “Dawn” and “Dusk,” which bring Side B to a gentle close (n5MD, February 28, pictured left).

Leandro Fresco & Rafael Anton Irisarri‘s intercontinental collaboration picks up where it left off on Una Presencia En La Brisa’ (A Presence In The Breeze).  Sharing files and comparing notes from Buenos Aires to New York, the two discover surprising connections and note “how small everything really is in the grand scale of things.”  Their style of drone is comforting and sedate, like a gradual realization (A Strangely Isolated Place, January 6).  DASPO‘s Samenreis was recorded in an anechoic chamber and highlights sounds isolated and pristine, caught midway between ambient and drone. The electro-acoustic set yields a sense of suspended time, reflecting the train trips that inspired its creation (Setola Di Maiale, February 7).  The label Other Forms of Consecrated Life continues to impress with another quality release, this one a study in calm restraint: Lynette Sandholm Evvers‘ Fundamental Colours II is a sequel to her 2017 album on the same label (January 1). 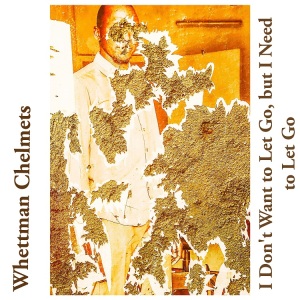 On I Don’t Want to Let Go, But I Need to Let Go, Whettman Chelmets completes a trilogy on memory that has stretched across the face of a year and included fall’s harrowing highlight Longread Memories.  Unlike that album, part three is strictly drone: devoid of voiceovers, the music speaks for itself, washing over the listener, threatening to do him in; yet perseverance is the concluding takeaway (Misophonia, January 31).

In like manner, Jana Irmert‘s Cusp is a microsonic investigation of the subject.  The score to Florian Baron’s documentary STRESS seeks to reflect the emotions of five young veterans as they struggle with post-traumatic circumstances.  The music has already picked up a film award in its native Germany (Fabrique, January 17).

The Buchla synthesizer is the star of Sutro Transmissions, a pair of side-long tracks from Thomas Dimuzio.  By including static, radio waves and alarms, the artist creates a disorienting atmosphere.  The album was recorded only blocks from where the synthesizer was invented.  As a special bonus, early buyers will receive a unique copy of letterpress art (Resipiscent, January 7).  Long Distance Poison offers another pair of side-long tracks on Technical Mentality.  The duo’s tone slides from ambient to drone, focusing on cool harmonic synth (Hausu Mountain, January 31).

Shō‘s Infinity Plus One is billed as “lighter and more optimistic” than its predecessor, but it’s still noticeably dark: a cold foray occasionally warmed by organic guests (Audio.Visuals.Atmosphere, January 10).  Dark apocalyptic drone metal act John 3:16 unleashes the two-track Sodom & Gomorrah, just in time for Lent; the end has never seemed so nigh (Alrealon Musique, February 2).  If the world doesn’t end then, the artist will also appear a couple weeks later on label compilation Oumuamua alongside Mark Harris, Pas Musique and a host of other artists whose textures range from drone to electronic to experimental (February 20).  And the first release from label Textur reflects its name.  Martin Messell‘s Ligesom Rigtige Mennesker embeds orchestral elements in a sea of drone, producing textures immersive and occasionally majestic (January 25).

Moving Furniture has two CDs slated for January 10.  Fani Konstantinidou‘s Winter Trilogy/The Big Fall is an investigation of the analogue and digital, one side graced by computer and accordion, the other by computer and synth.  Gareth Davis & Merzbow‘s Broken Landscapes is much harsher (as might be expected), and produces a sense of claustrophobia while drawing attention to “fears of mechanisation in the environment.  A torrent of noise reimagines the North Sea wind farms, the industrialisation in Southern California and the fight for the survival of animals in their overrun habitats.”  One can hear the panicked animals and distorted machines; it’s not an easy listen.