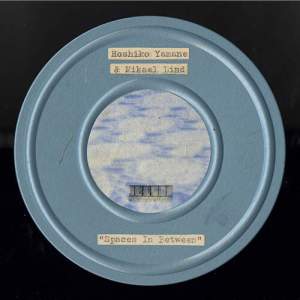 Our first review of the year celebrates the end of one year, the beginning of another and the passage of time. As Joni Mitchell sings, “There’ll be new dreams, maybe better dreams and plenty / Before the last revolving year is through / The seasons they go round and round / in the circle game.”  The title Spaces In Between refers to the holes through which one can see from one card to the next, the porous membrane between present and past and the literal distance between Reykjavik and Berlin, where these two musicians are located.  This long-distance collaboration feels a lot closer when the project is contained in an old film can, a reminder not only of the beauty of intercontinental connections, but that everything old is new again.

One might also infer that the title refers to the spaces between notes, as the sonic landscape is spacious and sprawling.  In “Connecting the Cycle,” one can hear each of Mikael Lind‘s distinct piano notes, set against the lilting violin of Hoshiko Yamane.  But it doesn’t end there.  Building upon a base of modern compositions, the two bring their own flair to the table.  Yamane is a member of Tangerine Dream (a reminder that Paul Haslinger also has an album out this season), while Lind is accustomed to folding electronics into his pieces.  By the end of the track, the tone has shifted from modern composition to a blend of ambient and electronic.

On “Reprocessed Phrases,” the backdrop becomes a drone, a reminder that time tugs backward and forward.  In this case, the reprocessed phrases are loops ~ metaphors of repeated thoughts, which in the negative sense are termed “old tapes” but in the positive sense might be cherished memories.  The interpretation ~ and application ~ are in the ear of the beholder.  There’s a certain sadness to “Flow Plus Cycle,” and in her press photo, Yamane has collapsed on the floor while holding her bow.  But Lind continues to look up, and perhaps to play his partner back to life.  Once those electronic pulses visit, it’s hard to remain melancholic. The music gives the listener enough to keep going.

Over the past decade, Time Released Sound has continued to provide a personal touch to every one of its releases.  All of its earliest releases included some form of a clock.  But this is the first decade mark they’ve passed, and this release serves as a lynchpin of time.  Will society move forward or backward? Will the nations drift closer or further apart?  Lind and Yamane offer a modicum of hope by setting an example of humble yet solid connection.  (Richard Allen)