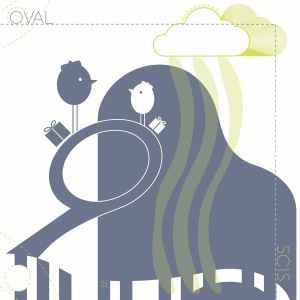 Depending on how one views time, Markus Popp has either been recording for 30 years or has just begun his fourth decade in music.  Both are accurate.  But where most artists are in decline by this point, falling back on the safe and bland, Popp stays in a constant state of reinvention.  The Oval of today is not the Oval of the 90s, founded as a glitch trio; nor is it the Oval of 2010’s comeback Oh, which some called “post-glitch” and others (stretching) called “post-rock” (although it did have guitar and drums).  It’s not even the Oval of Popp, which took a purposeful turn toward the club circuit; although elements of that release (the rhythm, melody and bells, all at 120 bpm) are prominent on Scis as well.  The vocoder is muted, but the danceability remains intact.

As usual for the artist, the announcement came out of nowhere, which is harder than ever to do in the digital age.  But let’s remember, Popp began living in the digital age before most of us jumped in.  (Did you have a computer in 1991?  Were you alive in 1991?)  As such, he’s had plenty of time to investigate multiple sonic possibilities, and this year he’s landed on playfulness, which is a great place to live at any age.  So say goodbye to (most of) the drums and hello to micro-snippets of woodwinds, prepared piano and strings, meticulously arranged in an electronic frame like a 1000-piece puzzle assembled atop a glass table.  This new, bigger sound debuted in November on the EP Eksploio, the banger of a title track leading the express.  With multiple electronic lines weaving in and out of organic lines, the song is a multi-track success, paving the way for four other intricate compositions, each one at single length (no more sub-minute excursions!).  “Blissous” highlights the stereo component to the nth degree, amplifying the attention to detail found throughout the artist’s work.

The cover of Eksploio contains a few clouds, but these clouds are relegated to the background of Scis, which focuses on two birds seemingly about to exchange gifts, perched in a field of stylized instruments.  The art fits the music, and extends to the back cover as well.  There we learn that the cloud itself is a gift, along with the tunes, while the scissor serves as a reminder of Popp’s loops and splices.  (Those who recall reel-to-reel know that it’s more than a symbol.)  It seems like Popp is having more fun than ever before, and his mood is contagious.  Once in a while, the density recedes to reveal a glimpse of the younger Oval ~ for example, the brief breakdown of “Robussy” ~ the irony being that older Oval seems younger than young Oval. Could the art of making music be the artist’s fountain of youth?

One of the album’s curiosities is a common use of the fade, which was once prevalent but has fallen upon lean times.  The fade is a great DJ tool (especially when everything is 120 bpm!) and aids in the transition from one track to the next, but it begs the question of repackaging the set as a continuous mix, perhaps along with Eksploio or even the compatible tracks of Popp.  Prior to the latter album, we had never regarded Popp’s music in such a way, as texture seemed more important than tempo; but now it’s a new era, and his shift in timbre suggests new possibilities.  According to Pitchfork, Popp’s remix technique in the 90s was “to smash the track to pieces and see what could be assembled from the fragments;” we’d love to hear what he’d do now with so much raw material on hand.  With Popp, the only thing that’s for sure is that nothing’s for sure, which is why he has remained relevant for so long, and why we suspect he’ll remain relevant for decades to come.  (Richard Allen)