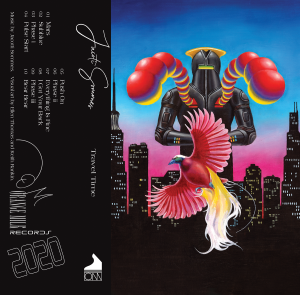 During an early period of blissful naivety, electronic music embodied a high-tech future on the brink of beginning. The prophecy was true, insofar as synthetic replication or processing of sound is now a given in most genres. However, when we revisit the self-consciously futuristic soundscapes of yesteryear, we get a distinct impression of the rose-tinted past, not the visionary future. As befits a period of postmodern irony and referentiality, some contemporary musicians explore a style best described as “retro-futuristic”.

Raid 2020 and Cyberpunk 2020 are among the handful of videogames set in their eponymous year, which they imagine as a cyberpunk dystopia. Travel Time, the new album from Jacoti Sommes, consciously riffs on the idea of our current year as an important threshold in twentieth-century futurology (2050 will be a bigger one, of course). The cassette J-card announces “2020” in a vintage typeface, while the artwork might be straight from the box of an old Sega “shoot ’em up” cartridge.

In its intro and interludes, Time Travel captures the ambience of its wormhole crossing. But the album is foremostly rooted in old-school electro, back before terms like “electro house” and “electroclash” muddied the water. From Afrika Bambaataa to Herbie Hancock, and from Cybotron to Doris Norton, the early 1980s were a great time for space-age drum patterns and synthesised grooves. Sommes may not speak through a vocoder, but tracks like “Pulse Start” are a respectful pastiche of this period’s other trademarks. “Subblue” has a cold digital texture, but many tracks create a warm video game vibe. “Push On” will make you yearn for Sonic the Hedgehog on a CRT screen. One or two tracks push this further, and end up close to schmaltzy library music, which may be another facet of the album’s nostalgia.

At its best, Time Travel recalls in spirit the fiendish action titles of last century’s arcades. On the other hand, A Co. offer up the imagined soundtrack to a fantastical role-playing game. Thom Chapman and Mike Caprarola are Nashville musicians, already collaborating in psych-pop band, Fox Grin. You can check them out in a mellow Audiotree session, where they explain their meeting via Craigslist. As a duo, Chapman and Caprarola pursue an instrumental, electroacoustic style which extracts from dreampop the mercurial essence of dream.

With track titles such as “Wizard Shit” and “Continue…?”, this record evokes some key tropes of the roleplay genre. The designation of SideQuest makes us wonder if this is a companion to their earlier album, or whether the main narrative is still to come. While the music prompts a pixelated Nintendo adventure in my head, it is by no mean a 16-bit homage to actual soundtracks. There is a rich organicism to much of the record. The keys are certainly real; probably the strings too. However, the whole sound is augmented by synth and sequencer. “Bongotron” has the most insistent beat, announcing the arrival of a fearsome boss character. “Dark Spell” seems to feature a haunted circus organ in a preindustrial village beset by evil forces.

Taken as a pair, these two releases take us way back down memory lane – but only to remember a time when 2020 seemed a distant possibility. Both records are under thirty minutes, and pack a concise punch of retro-futuristic sound. I only wish that we could really play the vintage games summoned up by the listener’s mind. (Samuel Rogers)