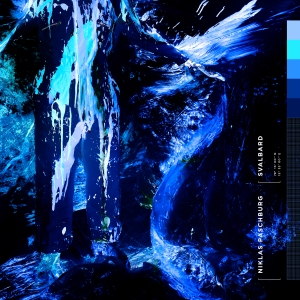 How would Hamburg’s Niklas Paschburg respond to the expectations generated by the success of his debut album Oceanic?  By recording its conceptual opposite.  His 2018 album (which also spawned a remix EP with Falty DL and others) was summerlike in tone, inspired by the movement of the Baltic Sea.  As one can tell from the title, Svalbard moves north to winter, dark and cold.  While the ocean continues to hold sway, the effects of climate change are addressed here as well.  If the new album – recorded during frigid, sunless days – still sounds warm, the mood may reflect warming, or the composer’s sunny mood no matter what the weather.

The solo piano notes of “If,” the album’s first single, open the album, a reminder of Paschburg’s primary instrument.  Within minutes, the palette widens to a considerable degree.  By the end, “If” has become a dance track with a heart of modern composition. This transition takes place again and again over the course of the album.  It’s clear that Ólafur Arnalds is an influence, but for once, we don’t mind making the comparison, especially as the elder artist has turned his attention increasingly to the electronic realm.  “Cyan” is one of the album’s three blue-themed tracks, building to a rush of percussion that belies its humble origins; “Bathing in Blue” introduces the percussion early, and conjures images of pools heated by thermal vents.

The arc of the album is important.  The early tracks are playful, especially the Hauschka-esque “Little Orc,” built around a folkish melody and ending far too soon, like a February day.  A thoughtful hint is introduced in “Season Shift,” extended in “Opera.”  Now that Paschburg has captured our attention, he heads to deeper waters; “Opera” darkest rumbles are like glaciers collapsing.  “Duvet” is restrained and respectful, a far cry from the album’s opening impression.  By “Arctic Teal,” the mood has turned pensive before closer “Winter Born” leaves the listener on a note of muted melancholy.  These glaciers may not be around for long.  Our dancing may turn to weeping.  There’s still enough arctic beauty to take our breath away, but in order to preserve it, we must become more than passionate observers. (Richard Allen)