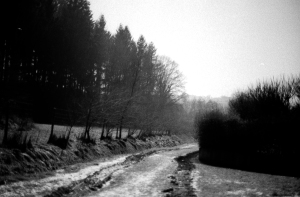 Leanna Primiani is a classically trained composer and conductor whose innovative orchestral and chamber works fuse concert traditions with electronic techniques. Performing under the moniker ANASIA, she expands her range even further by fusing orchestral, dark ambient, post-minimal and electronic elements. Her recent most recent work is Blurred, a 14-minute theme from the arthouse horror short Sulphur for Leviathan.

For The Road Less Travelled, Primiani has chosen a selection of work that explores her unique approach to time in musical form. Many of these works come from composers who, like Primiani, score film and TV.  And I think you’ll agree that Primiani has impeccable taste, as she weaves together music from many of our favorite composers, including Brian McBride, Budd and Eno, Jóhann Jóhannsson, Bersarin Quartett, Pan-American and more, situating her own work with respect to this lineage.

I am a classically trained composer/conductor/electronic artist living and working in Los Angeles. Creating under the moniker ANASIA, I merge my concert and electronic voices by way of organization, or musical form. As a composer, I have always been fascinated with the way music passes through time. Time, to me, is the one canvas that all music creators have in common. Some canvases are small (like ringtones) and other large (like a Wagnerian opera). No matter the size or length of one’s canvas, the most important consideration every composer/music creator must consider is how their music will be perceived in time.

I have always been frustrated with existing musical forms because, to me, they never seem to take advantage of the way music unfolds to the listener. To solve this ‘problem’, I have spent years perfecting a different kind of form using elements of mathematics and applying them to various musical applications. I call it TIME FORM. I create musical structures based on the idea of palindromes, the Fibonacci number sequence and the Golden Ratio (φ).

While composers have applied mathematical principals to their compositions for years, none have applied them directly to time. Instead, many composers of the 20th century use these mathematical constructs to determine the number of notes or measures. With this technique, the overarching form of a given work, the duration of each movements and subsequent sections of each movement are created according to the Golden Mean (1.68).

All my music, be it for orchestras on the concert stage or the ambient music I create as ANASIA, is created using this method.

Tell us what went into this mix.

The mix was designed around the idea of time. These tracks don’t seem to conform to the traditional definition of ‘form’, but rather take on a shape that is malleable, without definition. In this way, the ‘unpredictable’ nature of the music lends itself to exploration and contemplation. Listening to this mix is like looking into the composer’s soul… a kind of organized and beautiful sound chaos. As I created this mix, I was reminded of the difficulties we all face doing something others perceive to be outside the norm, and how our lives twist and turn with every decision good or bad, right or wrong. 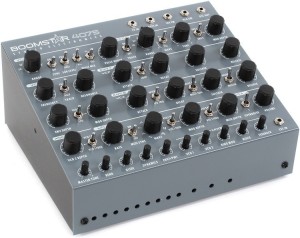 One of my favorite pieces of gear, my Boomstar 4075, is manufactured right here in sunny SoCal. Studio Electronics is one of those places that really care about great sounding gear… I mean really care. I’ve heard rumors that they are creating a new and improved version of their Midimini… I cannot wait to get my hands on that!