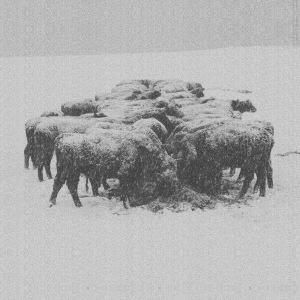 With nearly 40 albums to his credit, it’s a surprise to hear that this is bvdub‘s first album without vocals. After all, we’re an instrumental-based site and we’ve reviewed a lot of them.  But to be fair, Brock van Wey usually uses vocals in a textural fashion, using time-stretch and loop; although vocal, his albums haven’t seemed vocal; they have seemed like dreams.

That part doesn’t change in Ten Times the World Lied, a generous 78:45 excursion into blissful ambient drone.  Tones rise and fall, undulate and flatten.  Orchestral instruments rise from the depths and float for a while, searching for land before they descend once more.  Fans should be overjoyed at the seamless tone, as each track gently fades before another gently rises.  Although the lack of vocals pushes it from the foreground, the album is ideal as the backdrop to nearly any task: reading, writing, cooking.  It casts a pleasant cloud around the house, a welcome fog of sound, a white noise spirit to overwhelm any tiny real-life disturbance.

And yet, real life is present for those who wish to look deeper.  van Wey has always resisted any single interpretation of his music, but neither has he squashed attempts to paint over the tabula rasa.  And so one might make something of the fact that most tracks are 7:52 in length (a few being 7:53), making the connection to Ukraine Flight 752, shot down over Iran earlier this year; or the leap year 752, marked by conquerings and successions.  Since the only description is that each track is “in memory of a time the world lied,” one might jump to all manner of conclusions.  “Not Yours to Say” might refer to the cover-up of the Iranian government; “Not Yours to Build” to the Tower of Babel; “Not Yours to Take” to the slavery trade; “Not Yours to Find” to early “discoverers” of settled land; “Not Yours to Rule” to the bloody aftermath.  The most intriguing title, “Not Yours to Know,” strikes to the heart of the human condition as it pertains to faith: for now we see through a glass, darkly.

It’s fun to play match-up.  And we know that the world lies in all manner of ways, from the political to the commercial (for example, promises that a product will bring success, a procedure will make one beautiful, and the next movie to open will be fantastic).  From the titles and theme, one might expect an angry or accusatory album, but instead, as with most of van Wey’s oeuvre, the tone is one of higher surrender.  There are truths we may never know, but there is also comfort, majesty, awe.  As the organ tones surge in “Not Yours to Know,” one may think of grand cathedrals, of encountering the divine not through word, but through beauty and symbol.  Ten tracks, each recorded in one take on the tenth of the month: in numerology, ten defined as “constant change and flowing energy,” an apt description of van Wey’s work; but also the 10 plagues, the 10 Commandments, the perfect 10, the 10,000 x 10,000.

While listening, one might delve into numerology, symbolism and history; or simply allow the sounds of this album to conquer the anxieties of the day.  The piano of “Not Yours to See” is like the voice of a soothing parent, encouraging one to sleep.  The overall message (if there is one) seems to be one of comfort:  The world has lied and continues to lie; but real truth is eternal.  (Richard Allen)