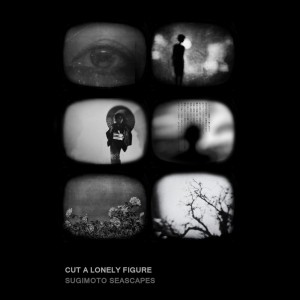 The artist name predates the argot of self-isolation and social distancing that are the watchwords of 2020, but it’s a suitably apt choice given the number of people who found themselves alone, not always by choice, before Covid19 began to spread. This release may not the most obvious comfort listen, being over 30 minutes of church organ music, but it may provide solace by offering the listener a much broader perspective on existence.

Cut A Lonely Figure is the chosen operating alias of David McNamee, who also runs the Blue Tapes cassette label. Sugimoto Seascapes is his fourth release under that name – sort of. It is billed as the final part of a trilogy, preceded by Rothko Horizons (on Bloxham Tapes) and the first part, The Sea Is Half A Rothko That The Sky Crushes On, which was credited to Thank You, Merciless Onlookers, but is just McNamee, in a live environment. There’s also another ….Figure release which isn’t part of the trilogy but by this point, we are probably muddying the waters unnecessarily. The main progression across the trilogy seems to be the gradual shedding of instrumentation, in much the same way the artist referenced – Rothko’s massive compositions of layered paint – has given way to Hiroshi Sugimoto’s monochrome photographs which are even more minimalist than Rothko’s art.

You don’t need to be particularly familiar with the two Rothko pieces to appreciate Sugimoto Seascapes, which is performed on the organ at St Andrew’s Church, Surbiton, and enjoys the pulsating drone of the bass pedals from the start, as the keys hold long, long chord patterns, slowly shifting from one tone to another. As Sugimoto creates a static image of an ocean we know to be in constant motion, and full of life under the surface, so it is with this recording – the notes are held down but as this is an organ there is no shortage of subtle variations in the sound itself. The ear can pretend it is a series of static notes, but the brain is filtering all manner of ebb and flow. It’s relatively rare to hear an organ played in such a way, and it’s full credit to Stacey Harvey, who recorded it, and Angel Marcloid who mixed it, that the enveloping sound draws the listener to discover fresh sounds and vibrations. The deeper you listen the greater the reward.

The whole work isn’t that long but it feels immense, transporting the listener out beyond our earthly home, into the heavens. I recently saw an installation projecting galaxies onto the inside of a cathedral, and I can’t help but think this would have been the ideal soundtrack for the experience. In the digital format, it flows seamlessly from the first half to the second – the cassette version will see it split up midway which might puncture some of the majesty when it is eventually released but it is worth getting your pre-order in now. Until such time comes as a trip to the post office with multiple jiffy-bags is possible, just soak up the download. (Jeremy Bye)