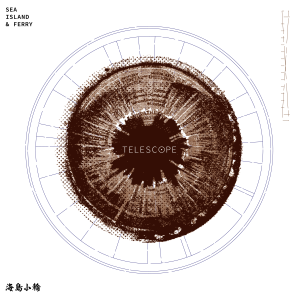 We’re receiving a lot of releases in real time these days, offering an immediate view ~ a telescope ~ into the crisis as it continues to unfold around the world.  Sea Island & Ferry began writing their album as a response to the crisis of climate change.  Then Hong Kong erupted in protests, and then the coronavirus struck.  The quartet has been right in the middle of all the hardest things.  How would they respond?

The answer, unsurprisingly for those familiar with their debut album Crossings, is with beauty and grace.  In an unstable world, they continue to find stability in nature, even when it falls out of balance (koyaanisqatsi).  It’s a comfort to hear again the combination of piano, xiao, cello and saxophone.  By concentrating on eternal gifts: a walk at dawn, passing showers, the change of seasons, Sea Island and Ferry underlines the need for preservation in a gentle and spiritual fashion.  As the solo saxophone launches into “Cotton Tree,” it sparks the interest of the other musicians, who fold in their own timbres like carefully cracked eggs.  Each performer receives his moment in the sun; this is clearly a group effort, with no dominant instrument.  This is the way forward as well: for people to cooperate as they seek a common goal.

So what is the “telescope?”  In this presentation, it refers to the perspective of time.  We look back on prior generations, as future generations will look back on us.  And what will they see?  Will they see a generation that pulled itself from the brink of disaster, or one that lived in disregard for its children and grandchildren?  Will our current history be only the light of dying stars?  The questions are dire, but the quartet’s mood is unrelentingly positive.  Even when the music grows urgent and dramatic, it remains upright.

In the longest tracks (the aforementioned “Cotton Tree” and the 10-minute title track), the band is able to stretch its wings.  The later tumbles through various movements, bordering on post-rock, picking up tempo mid-piece as if to suggest the manner in which time seems to race ahead.  But then there is still time for thought, for questions to hang in the air, for meditation or prayer.  In the shorter pieces, a few just the right length for singles, Sea Island & Ferry distills its formula to the essence.  First single “Walk at Dawn” is warm and inviting; “A Few Showers” contains a particularly pleasant passage (4:52-5:36) that serves as a chorus, and we suggest it be the second single if they can bear an edit.

“Spring & Autumn” closes the set as an unusual pairing; the seasons never touch, but each is a season of transition.  We are in the midst of such a transition right now, with no predicting which direction we might head.  Will the world discover its compassionate side, or turn inward once again?  Here’s hoping the telescope that looks back on us is kind.  (Richard Allen)