Silk Saw ~ Nothing Is Finished / Everything Starts 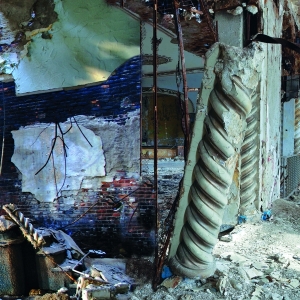 Only a few days ago, I wrote that I had been far less interested in harsh music as of late.  Then the protests, riots and looting began.  Now I’m in the mood!  So today’s review covers a dense album from Silk Saw, who write “destruction is where everything starts.”

A quick note to ensure we are understood: we are not condoning physical destruction, but the destruction of systems, such as those that allow racism, sexism, child slavery, environmental rape and all manner of horror to continue in supposedly enlightened societies.  The album’s cover image could be interpreted as what’s left over after a high-end store has been raided, but more importantly, it’s a symbol of the album’s first track, “Collapse of the Merchant Civilization.”  In a mirror manner, a high-end chain store is a symbol of rampant materialism, have and have-nots, cultural “superiority” and glass ceilings.  It’s hard to take anger out on faceless corporations (Amazon employees say, “Thank you for the nice commercials, but when are you going to raise our wages and protect our safety?”).  “Collapse of the Merchant Civilization” offers a sonic collapse, in which the beats fall where they may, instruments seem to warm and cool, and everything teeters on the brink of chaos.  There’s very little silk in this saw.

The sense of the sinister continues on “Old Predator Habits,” a reminder of how difficult it is to curb the abuse of those in power.  The second of three 17-minute tracks, “Old Predator Habits” lurks and seems always ready to pounce.  Imagine having no power and no work options, having to choose between systematic abuse and physical poverty.  The track feels as claustrophobic as such a situation would imply.  One remembers the lightness of the Belgian duo’s Imaginary Landscapes and yearns for some of that here, but the discomfort is intentional.  We’re not supposed to look away.  As ongoing protests indicate, we’ve been looking away for far too long.  By the fourth minute, rain pounds on a factory’s tin roof; the atmosphere outside is just as oppressive as it is inside.  By the seventh minute, the factory has accumulated a series of polyrhythms: internal, interlocking mechanisms like those meant to protect the elite and imprison the helpless, voiceless masses.  By the thirteenth minute, unrelenting drones have filled every possible sonic space, making it nearly impossible to breathe.

Strangely, there’s also comfort in such sounds, as they can imitate the mass of voices in one’s own head: all the stress and anxiety, fear and anger.  When wielded by the listener, this music becomes a weapon.  “Open a Breach in the Leaden Sky” even includes metallic knocks that sound like sabers.  Yesterday, the American military backed down from plans to pack bayonets for use against their own populace.  Officers operating under insane orders reported that they “felt like pawns.”  The end of the track sounds like rubber bullets.  In some states, law enforcement officials are firing.  In others, they are kneeling in solidarity with protesters.

Something needs to be destroyed.

As Silk Saw writes, “nothing is finished / everything starts.”  Only from the ashes of an old society can a new one be formed.  The world can emerge from the chrysalis of COVID-19 ready to rebuild, not to the way things were, but to the way they should be.  “See Utopia as Possible” demonstrates that Silk Saw is ready for revitalization as well.  The persistent beat of this piece is like that of marchers or construction workers.  Are we ready to tear down our own assumptions, prejudices, participations and enablings?  Are we ready to build something new?  This album’s very harshness offers catharsis, a purifying fire that can leave emotions cleansed, minds focused, hands and feet ready for action.  (Richard Allen)