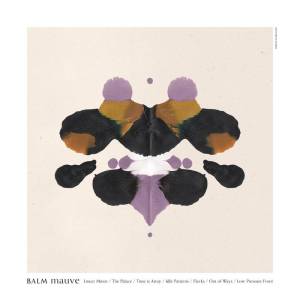 The name Balm is instantly appealing, drawing associations with healing balms and the hymn, “There Is a Balm In Gilead.”  This Amsterdam duo also lives its name by donating all proceeds to the Try Center for Research Training and Education, who seeks to “empower and inspire women and youth.”

We’re also a fan of color-based recordings, and Mauve is an unusual choice: the subject of a bestselling book by Simon Garfield about the accidental invention of the first artificial dye.  Although the color, also known as “mallow” or “pale violet,” is found in nature, it wasn’t named until the late 18th century, when it began to take on symbolic associations of “femininity, romanticism and nostalgia,” the latter two attuned to its use here in ambient-electronic music.  Such pop psychology can also be seen in the Rorschach test of the cover, which as anyone can see is an image of a sweating dragonfly wearing a mask printed with the pattern of another dragonfly.  In mauve.

Balm is a breezy, compact EP, but honors its intention by slowing the pulse and cooling the soul.  The set begins swiftly before settling into a comforting blend of synth and light percussive sounds.  A balm can be musical as well as physical, and in each case the effect is instantaneous.  Shoegaze surfaces in the gentle “Time Is Away,” which sounds like The Cure ~ if The Cure were Hawaiian and meditative rather than melancholy.   The timbre reappears in “Flecks,” whose life is as brief as a traffic light.

The EP is in no hurry to end, but does so in only 22 minutes.  Ironically ~ yet perhaps intentionally ~ experts suggest that 20 minutes of daily meditation or exercise can yield incredible health benefits.  This Balm is the perfect length for a single session.  As if offering a testimony, one of the musicians hums on “Out of Ways,” an expression of contentment.  If this mindful music works on these Dutch composers, we suspect it will on audiences as well.  (Richard Allen)