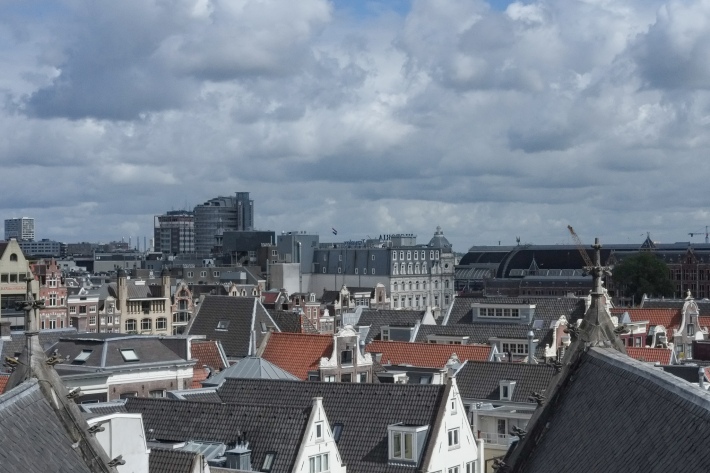 During the April pandemic days, BJ Nilsen adopted a new routine.  Every day, he would visit the nooks and crannies of Amsterdam to record the sounds of lockdown, producing a real-time historic reflection.  But when April ended, the pandemic continued.  As Nilsen missed making daily recordings, and there was still plenty to document, he headed out once more, supported by the Amsterdam Fund for the Arts.  Writes Nilsen, “I want to build an archive of sound memories for a time when the city has returned to its previous busy state and we might need a reminder how this time sounded.”  During this time, tiny signs of progress appeared.  Aeroplanes returned; Amsterdam became louder and busier; the city joined the global protests over police violence.

One can see an immediate difference between Pending and Auditory Scenes Amsterdam in the tone of the daily photographs: black-and-white for the former release, color for the latter.  The series begins loudly as well, with the underwater sounds of ferries and freight ships.  We realize that this is a new series in one sense and a continuation in another.  While listening, we become aware that marine life, free from the sonic overload of human transport, was able to enjoy its most relaxing spring in ages.  And then a peaceful day in the forest, with occasional bicycles and horses (the horses not heard on this recording): a sign of almost-normal but not quite.  The bikes are especially crisp and must have passed right in front of the microphone!  On May 20, Nilsen writes, “Behind me an road with passing joggers and cyclists. Trains are passing from west to east. A couple with a dog sits to my right eating crisps and drinking wine.”  Already this is nothing like Pending, so sparse in human activity. 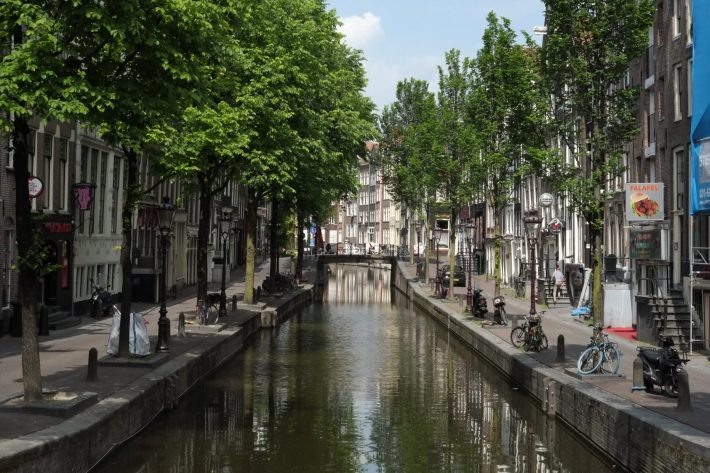 Are we glad to be so active again?  Or do we miss the quietude of our pandemic days?  As much as we might have cringed at the admonition to shelter in place, we understood its intrinsic value ~ if only we were bold enough to embrace it.

By the next evening, people are hanging out in the square, talking, laughing.  More bicycle wheels. Before long, performances and streetcleaners reappear, along with honking: an unwelcome return.  A homeless man is a reminder that not everything was good before, that much still needs to be fixed, and that the pandemic is not the only crisis.  It’s no surprise that Nilsen retreats the next day to the comfort of birds.  The Oudezijds Achterburgwal is particularly calming, an oasis in a growing field of noise.

The photo of Sloterdijk station will be eye-opening for many.  Yes, there are cars in Amsterdam.  But many take the bike to the train.  One site explains, “Driving in Amsterdam is not really recommended as the city centre streets are narrow, there is often ongoing construction work and parking places are limited and expensive.”  Nilsen retreats to a cavernous underpass the following day, where the sounds are amplified and deep.  On the final day of May, the streets are filled with anticipation: the next day the markets will be reopening.  But Nilsen avoids this ruckus on the first day of June; in an amusing post, he reports that he woke up to the sound of cats fighting, hoped to capture it on tape, and failed.

On June 3, Nilsen reports, “first time on a terrace since March” (the red photograph above).  Our lives are now filled with “first time since” events, some positive and others not.  Sometimes we realize that our idealized version was different from actuality.  Other times we return to restrictions, and wonder if it’s worth it: for example, the need to follow arrows or the inability to choose one’s own spot.  Either way, the arrow is pointing forward.  A downpour drenches the sound of conversation; we ask which sound we prefer.  Guiltily, I choose the rain.  But then, On June 7, a beautiful privilege, as Nilsen visits the belltower of the Oude Kerk with bell ringers, restoring faith in the sounds that humanity can make.  The sound hearkens back to the first piece of Pending, but these bells offer an even more compelling musical treat.  And what a view (seen on the top of this page)!

Then the sound broadcast round the world: 15,000 people in Nelson Mandela Park, gathered in demonstration.  We realize we’ve been cut off from humanity for so long that we’ve forgotten what hope they can embody when turning a collective spirit to social change.  Chanted in English:  “We are black!  We are beautiful!  We are smart!  We are strong! … Black Lives Matter!”  The height of this piece is offset by the amusement of the next, as a passerby asks Nilsen if he is a YouTuber.  And then a final rain, a symbolic cleansing, a metaphor for all that has come before and still may develop.  Will global empathy increase as a result of shared sorrow and fear?  Will the spirit of community, “we’re all in this together,” be extended even after we find a vaccine?  Will a better world spring forth from our marches and dreams?  The answers are still forthcoming.  But as we look back and take inventory, as we study this possible hinge point in history, we will have these sonic photographs to study, to cherish, and to enjoy: all born from the power of a daily walk.  (Richard Allen)