Atli Örvarsson ~ You Are Here 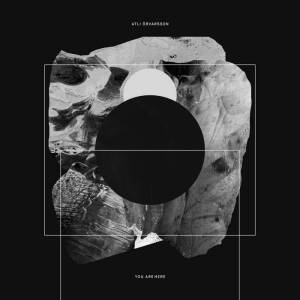 The Summer 2020 slate is already loaded with amazing albums.  The first comes from Iceland’s Atli Örvarsson, who has been scoring for film and TV for decades (The Edge of Seventeen, Vantage Point, Chicago trilogy) but is finally releasing his debut album.  Add Sinfonia Nord, múm cellist Gyða Valtýsdóttirand and icy Vatnajökull footage, and the album sells itself.  The only reason Örvarsson is not a household name is his behind-the-scenes approach; this should change with the release of You Are Here.

The theme of the album is “moving back home,” while “here” means the small town of Akureyri.  Not only can one hear Iceland in these pieces, one can see Iceland.  Those stuck in a hot pandemic summer may experience a cool shiver watching Blair Alexander’s video for “Húm Pt. I.”  The same director helms “Breathing,” filmed in an empty concert hall with social distancing: a reminder that Iceland did it properly, and conquered COVID-19.

“Húm Pt. I” is built on a simple piano base, from which the strings unfurl.  Sinfonia Nord is active in both parts of the piece,” which makes a beautiful launch, producing a sense of melancholic wonder.  The second part is a full-fledged blossoming, as glockenspiel and electronics call the body to a state of active calm.  Then comes the Valtýsdóttirand piece, “Dropar,” which deepens the bittersweet tone.  The melody, built around four fluctuating chords, has the potential to become an instrumental earworm (a terror for those trying to remember titles!).  The longest song on the album is also the most evocative.

Much of the album was composed while looking out the window at the Eyjafjörður.  (I’m jealous again as my view is of Dunkin’ Donuts!)  Fjords offer ample space for reflection, as well as natural solace in times of grief.  Like many of us, Örvarsson was deeply affected by the loss of Jóhann Jóhannsson.  The appearance of a track inspired by Jóhannsson is a gift, especially as it is also the album’s most uplifting piece.  “Flying” imagines the composer finding happiness on a higher plane; the deep closing notes are like a goodbye.  The association is cemented in the final track with a guest appearance from Hjaltalín violinist and Jóhannsson collaborator Viktor Orri Árnason.  Iceland’s tight-knit musical community is all about mutual support; but it’s also about mutual grief.  Something beautiful has risen from these ashes.  (Richard Allen)