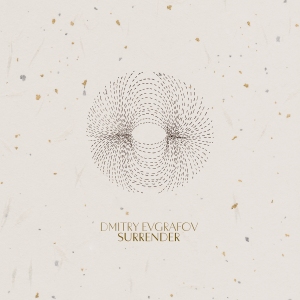 We’ve been fans of Moscow’s Dmitry Evgrafov from the very start, when he released Lying on Your Shoulder in a cardboard sleeve with tuck-in flap.  From there he’s gone from strength to strength; Comprehension of Light is one of ACL’s top modern composition albums of the decade.  On Surrender, his sound continues to evolve; the album has one of the most unusual arcs we’ve encountered lately, refusing to head where one might expect.

Nothing surprising happens at first.  “Splinter” begins with pure piano, the instrument we associate with the artist.  A minute in, Moscow’s eight-piece Opensound orchestra shoots the song straight into the stratosphere.  The track marks a natural progression toward density ~ a welcome shift, but within the cone of expectation.  The first single, “Sparkle,” continues the orchestral timbre, and includes a brief yet striking breakdown.  Then a brief return to miked piano.  If the whole album were like this, we’d be thrilled, but not challenged.  The assumptions are set before being broken.

Enter the triptych “Context / Anthropocene / Stymie.”  “Stymie” is a good word for this section, as “Context” erupts from the quietude of the ivories into the thickness of electronic percussion.  We did not see this coming, nor the soft voices of the middle piece, reflecting “a neural network learning to speak.”  What hath thou wrought?  The middle piece is laden with a sense of foreboding, pulsing and clanging like an outtake from an 80s thriller, until it isn’t; in the end, Heinali’s piano motif sets up the climax.  This is where liner notes become important, as otherwise we’d have no context with which to decipher the pairing of the guzhen (a Chinese zither) with something that sounds like Donald Duck.  Without notes, the voice comes across as an intrusion.

As if to assuage, Evgrafov returns to the orchestral field for the LP’s next segment, which includes the exquisite “A Rural Song.”  Reminiscent of the classical canon, this piece reflects a deeper complexity for the composer.  Evgrafov ultimately moves from intricacy to intimacy.  “Endless” features Aukai on ronroko, a reminder that Aukai has an album due late this summer.  “Serene Air” and “Far and Close” are a pair of soft pillows, beckoning the head and recalling Lying on My Shoulder.  Despite its fullness, the album ends with the composer sitting at his piano, alone.  The set has come full circle, returning to solitude while taking inventory of a decade.

The cover art is worth note, as it bears a tonal resemblance to Comprehension of Light and contains smaller debris.  The impression is that the dwarf star has continued to expand: an easy metaphor in light of the tonal palette.  Evgrafov has surrendered to the creative impulse, allowing collaboration to combine with the creative muse, producing another memorable work.  (Richard Allen)