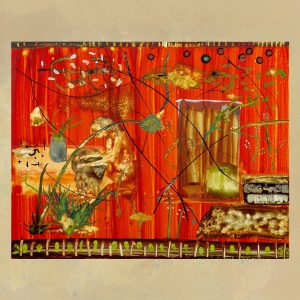 The Log and the Leeway is one of the most unusual albums we’ve received this year, from one of the most unusual artists.  But where other artists come across as weird and off-putting, Kaboom Karavan (also known as Bram Bosteels) comes across as mysterious and iconic.  There’s a sublime intelligence at work here, present in the sheer breadth of timbres, visible in the art of John Lurie (cover) and Walter Dhoogh & Erik K Skodvin (internal).

One can’t glean the insanity from the elegant opener, “A Foregone’s Affair,” although odd field recordings dance around the edges and the track comes across as a Gypsy dance (albeit with a modern flair).  The tagline “folk music from another dimension” certainly seems to fit.  But when throat singing appears in the subsequent piece, the adventure is announced.  Lead single “Silk Skin Armor” provides a taste of what listeners might expect: a smoke-filled caravan, tents inhabited by strange creatures, contortionists on exotic furniture.  But since the tracks are so diverse, it’s hard to get a wide angle view. 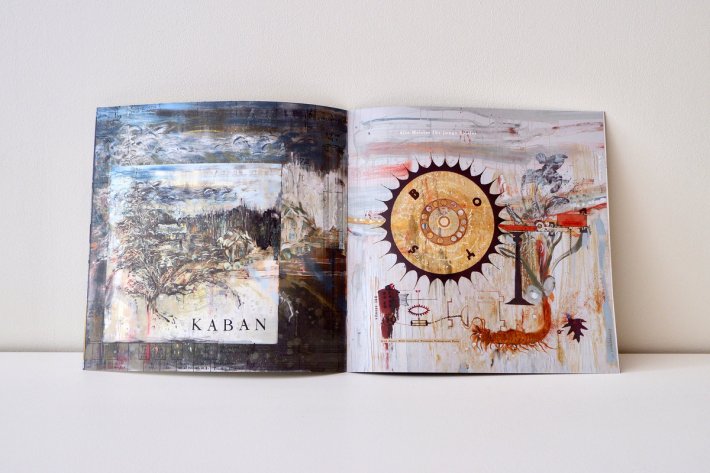 Losing his father suddenly and unexpectedly was not the adventure Bosteels had in mind when he embarked on the journey that led to this album.  He set off on a journey of exploration, inspired by old maps and journals, hoping to find he knew not what.  While pain is apparent in the album’s abstract sounds, there’s also an abundance of curiosity, relayed to the listener via sonic means.  What can one do when one’s world has been knocked off its axis?  Bosteels’ answer is to find – or invent – another world.  Instead of shrinking from the mystery of death, he moves deeper into the mystery of life.  The blood red vinyl intimates both, while the few lyrics that poke through the morass (“Where do you go, boy?”) suggest the need to put one foot in front of the other even when unsure of the destination.

The title “Silent Barter” suggests one of the most difficult stages of grief (bargaining), while reflecting a traveler’s practice.  The intrigue is in determining what is being bartered, and what one is bartering for.  A more typical person might barter for answers or inner peace, but Kaboom Karavan has never been typical.  We imagine that insight is bartered for at the cost of innocence.  The conclusion may not be a why, but a look into the inner sanctum, where nothing is revealed save for new mysteries.  The track suggests suspension, sanctum, mirrors within mirrors. The wordless choir may be mediums, ghosts or sluggish angels; the ticking may be a broken timepiece or turn signal.  The labyrinth runs deeper than one might expect, and there is no thread to leave behind.

What then is the “Patrulha” (“Patrol”)?  Are these forces malevolent or benign?  Is death forever, or a passage to another world?  We suspect Bosteels will never abandon the search, but in The Log and the Leeway, he’s renovated the void, creating a space in which restless spirits might live.  (Richard Allen)