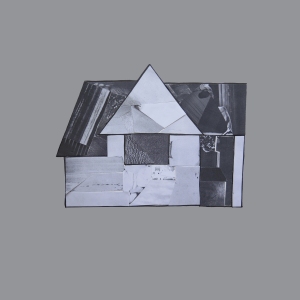 Home has been a long time coming, and might be considered a culmination of a lifelong journey.  Archie Fairhurst (Romare) was born to a nomadic family and extended his travels with a career on the road.  But now it seems like he’s finally found a place to call home ~ the outskirts of London, where he has started a family of his own.  In lockdown times, it’s good to have a place to lay one’s hat, and while other artists are feeling the effects of tour withdrawal, the sparse dates left on Romare’s calendar leave plenty of time for family bonding.

One can hear the relaxation in these grooves, which alternate between the bucolic and beat-driven.  Lead track “Gone” first appeared nearly a year ago, implying a happy sort of leaving.  B-Side “Danger” is not on the album; a slower piece, it can be purchased separately or as part of a bundle for completists.  It’s worth seeking out for the “oh Lord, nobody but you” gospel tinge.  Then the singles started arriving fast and furious:  “Sunshine,” “The River,” “Heaven.”  As these are club bangers, they are offered in full and single versions: one for clubs (once they open), another for radio, a reminder of the nearly forgotten CD5 format.  “Sunshine” is my personal favorite, not only because it’s summer, but because the track is so ebullient and contains a breakdown that recalls the glory days of trance.  The irony: at 5:43, it doesn’t really need an edit!  At eight and ten minutes, the others do.  The piano and percussion of “The River” conjure pleasant memories of Fatboy Slim; one can picture this in a Botchit Breaks mix.  But the real treasure for completists is an alternate version of “Heaven” featuring more dynamic variance; to this reviewer, it’s even better than the album version.

Given these tracks, one might reasonably assume that Romare is an uptempo artist; but there have always been two sides to his music.  An LP that “explores spirituality, identity and belonging” needs space for reflection, and the other half of the album honors this need.  Zooming in on the cover art, one can see that it is comprised of smaller slices, each representing an artist incorporated into the set.  In like fashion, “home” is an amalgamation of thoughts, feelings, memories, and people.  Romare has a primary home, but home extends beyond his walls and even, given his travel history, to the world.  The warmth of his recordings suggests a love for the global community and a heart of compassion.

“Dreams” offers the first such expression with a wistful undercurrent.  But halfway through the album, the tempo slows considerably.  “Deliverance” (thank God no relation to the movie), “High” and the title track embody perspective.  While the outer world seems to be speeding up, Romare’s inner world as a father seems to be slowing down.  Fairhurst takes account of where he has been and what it has taken to arrive at this fulfilling place.  One can dance to the title (and closing) piece, but it’s more likely one will sway or rock (as in a rocker, with a child in one’s arms).  The flute and female voice seem like dual lullabies, not meant for children alone.  It’s been a long journey, but we have finally arrived at home.  (Richard Allen)