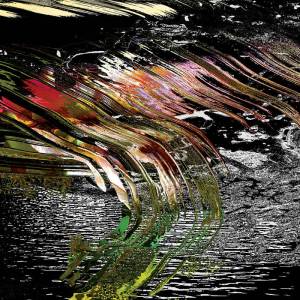 With this post,  we welcome new Seattle label Obscure & Terrible, founded by Josh Medina.  “Obscure” fits the bill, as the focus is on the experimental artists of the Pacific Northwest; “Terrible” refers not to quality, but to grandeur, as in “the great and terrible day of the Lord.”  As such, we’re not surprised that the music pivots from tender and thoughtful to tense and turgid.

Take for example the opening piece of Medina’s own Four Compositions, shared equally with bassist Paurl Walsh.  A lovely ambient gives way to a steady drone only two minutes in.  The sound keeps expanding until it fills the room.  By the end, it’s noise, teletype and fire extinguisher.  This particular piece was created for film, the others (in order) for media, stage and installation.  The duo nearly caused a house fire once while performing music for a butterfly funeral, which pretty much captures the dichotomy.

This first track bleeds directly into the next, which is slightly calmer in volume but not in agitation.  For a few seconds it threatens to turn into a club track, then relents, ending instead in an electronic slicing.  Now it’s time to dance, as the synthesizer calls the way forth.  (For Stage) is dense and immersive, and with few signposts, one can imagine the principles moving however they prefer.  After the piece descends to a soft landing, it gives way to the nearly 20-minute finale, whose tea kettle breakdown is a launching pad for a pulsing excursion, visited by static and glitch.

Kole Galbraith presents the second tape, PANNA II, which jumps head-first into a cauldron of noise without gauging the depth.  Fans of Merzbow will be happy with this one; the claustrophobia is unrelenting.  Swirl upon swirl of feedback descends on the sonic field, withdrawing to reveal field recordings and muffled voices.  The ancestral theme is lodged in this fugue like the deep end of a hieroglyphic cave.  The back end of Side A is more spacious, yet without illumination.  Is it better to be able to hear what’s in the cave, or to be drowned in sound?  “From the Dust of Earth (Wak-Wei)” is pure, deep-throated drone, louder timbres again giving way to softer.  In the 13th minute (of course!) a tinnitus- like tone approaches, draping itself across a quarter of the piece.  And then to dust the track returns.  Two additional tracks, doubling the length of the release, are available to physical buyers only.

This is a great start for the label: a memorable name, abstract art and timbres to match.  With any luck, the label will not be obscure for long, although ~ in the Old English ~ we hope they remain terrible.  (Richard Allen)