Guy Andrews‘ latest sonic book contains a story told from two different angles, along with a prologue and epilogue.  The middle pieces are intended to be heard as a whole, which may cause listeners frustration, given that the first part is out in September and the second in November; but the full experience is worth the wait.

The prologue was recorded during Hurricane Dennis in February.  Twenty Seven Inches of Mercury is an eight minute dance of trepidation, as field recordings meet drone in a downpour.  As the music fades, one can still hear the fury of the lashing wind.  This experiment carries over to the main project, loosely explained as an electronic composition followed by its “ambient counterpart.”  But it’s not that simple.  Instead, think of Rashomon; the assigning of genres is subjective and may be unreliable.  Each half-hour piece follows its own path.

What does hold true across the board is Andrews’ fascination with texture.  The music is awash in atmosphere and dynamic range.  The first part is broken into ten movements, the second six, but we recommend the continuous mixes.  As we listen, we admire the ambition; it’s not easy to keep one’s attention over the course of half an hour, and to do so twice.

Permanence sets melodic arpeggios against harsh protuberances.  Static charges hiss and erupt as club beats surface and recede.  The effect is that of a mix tape in the hands of a flawless DJ.  But the set is not designed as club music, as the breakdowns are too long and abstract.  One such segment builds on the tumult of Twenty Seven Inches of Mercury.   Rain and wind spark percussive echoes; the thunder rolls, while off in the distance, a church bell chimes.  This segment stretches over the course of a few minutes, during which the beats are nearly forgotten.  Andrews lays out the carpet for them for bubbling synth patterns, which are eventually enticed to return like children sensing candy.  When this occurs, huge chords celebrate their arrival.

Yet again, the beats retreat, replaced by bells ~ an echo of the church spire met by the contrast of deep bass before the real church reappears.  Suggesting dual themes of permanence and evolution, Andrews leaves the interpretation open to the listener, while reflecting a persistent theological debate.  And then, just as the spiritual figures before him, the artist shifts gears. 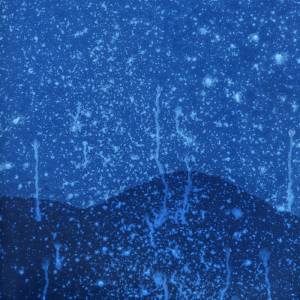 [MT][NT][ET] dissects the music from another angle, just as one might dissect a memory or reevaluate one’s own past.  In some cases, the new truth becomes the only truth, although one’s companions may remember the “real” truth, or at least their version of it.  The tabletop field recordings that launch the reinterpretation include the rustling of paper and the scribbling of notes.  While Jenny Frances’ art for the first suggests a shroud, her art for the second suggests stars.  When the birds start singing, one senses that a corner has been turned, despite the valley of drone.  If one were spiritually minded, one might recall a dove descending upon a lonely figure who is about to be driven into the desert ~ yet given strength for the journey by this very encounter.

So yes, the second piece is more ambient than the first, although not entirely ambient ~ a process of introspection that mirrors that of the artist.  Even so, the later interpretation is not the final word.  Already in the works is an album of remixes by Kevin Drumm, due in 2021.  In this epilogue, one might hear pieces of Permanence become actual club tracks, their textured forays papered with beats; or one might hear [MT][NT][ET] stirred into agitation.  Then again, we may be surprised, as Andrews likely will be as well.  It takes courage to ask another person to interpret one’s own autobiography and to lend the new interpretation credence.  Kurosawa would be proud.  (Richard Allen)