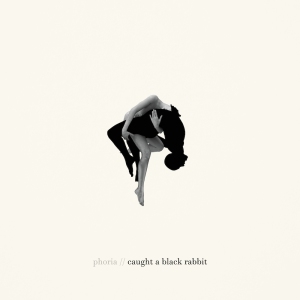 From 2010-16, Phoria released a handful of electronically-minded, lyric-based EPs and one LP, then went quiet for four years, only to emerge as a modern composition ensemble.  Whenever a band switches from the vocal to the instrumental, we feel like they’ve been converted.  While it’s not quite the same as switching from the dark side to the light, the move allows listeners to imagine their own stories, and frees the music to wander down corridors of interpretation.  Will current fans be disappointed?  We doubt it; enough time has passed, and the new sound is sensational.

A black rabbit is not necessarily the opposite of a white rabbit; it can also symbolize a darker or more private side.  Caught a Black Rabbit reflects a struggle with nightmares about the enormity of the world, and encompasses the entire breadth of human existence, from birth (a band member’s first child) to death (a cello inherited after a young owner’s demise).  The music bends down to despair and stretches up to delight.  The first video and track, “Intro,” demonstrates this journey through sight and sound: a gradual opening, particles rising, instrumentation swelling, the universe beckoning.

The world can be a terrifying place, but it can also be a comfort.  The band seems to be saying, “just breathe.”  In seeking to create pure beauty, they allow their music to do the talking.  “Kilograms” yields the album’s first major bloom, but the band’s first official single, “Currents,” showcases the entire ensemble and possesses the set’s more expressive tonal arc, replete with (wordless) voice. The counter-melody that appears in the fourth minute is particularly expressive.  Ironically, the next video in queue is the 46-second “Saving Us a Riot String Recording” from 2013, casting a line from old to new and suggesting that the current sound is less an overturning than an evolution.  Further evidence to support this theory is found in the inclusion of “Mass (Reimagined),” which has been circulating since 2018 as an alternate take of a track from the band’s Volition (2016).

“Lullabi” exudes a fairy tale nature, apparent in the music box tones, gentle conversation samples and hints of children’s laughter.  The connection is underlined in “Fairytail,” the album’s second single.  In this brief piece, Phoria heads straight toward AWVFTS territory, and nails it.  The final surge is the high point of the entire album.  After this, one sees “Robin’s Cello” waiting at the end, and wonders if the mood will shift yet again.  Yet the closing song symbolizes both death and new life: a memory passed to new recipients, a legacy widened.  The album’s closing tone is one of reverence: the life of one musician buoying the spirits of an entire band.  (Richard Allen)