With over 200 releases listed, this is once again our biggest Winter Music Preview ever, and the largest instrumental music preview on the planet!

Winter is a fitting season for ambient music, which seems tailor-made for the soft, the still and the barely-moving.  Quarantine isolation can make the days feel colder and the nights feel longer, but good music can reverse the trend.  The artists in this genre head in two directions.  Some produce scores that empathize with loneliness ~ and in drone, even anger ~ while others produce a sense of warmth.

Last year at this time, we wrote, “We’re going to need a lot of hope this year; we’re going to need a lot of strength.” More prescient words were seldom spoken. But it does seem that 2021 will be a little brighter; the combination of new governments and new vaccines is encouraging.  And there is new music to look forward to as well!  Over the next five days, we’ll share the sounds that will be scoring our first, and hopefully only winter of lockdown.

Did you know that there is an Ambient Hotel in Brasov, Romania?  That’s where we found the cover image for this article.  Looks like a gorgeous place to visit once travel restrictions are lifted!

Rich’s Pick:  Ai Yamamoto ~ Pan De Sonic – Iso (Room40, January 29)
What happens when musicians are stuck inside the house too long?  They start to hear music in strange places, and discover refreshingly new instruments.  This was the case for Ai Yamamoto, whose endearing new set covers the length of the day, from alarm to wine bottle, incorporating toaster, vacuum cleaner and other household objects along the way.

We hear a lot about music for children, but how about Music for Parents?  Florian T M Zeisig seeks to fill the niche with a restive album on Métron Records.  Inspired by his parents’ new vibroacoustic mattress, the album contains charming titles such as “Dad Is Painting Again,” and Dad even designed the cover to make the title come true (February 2).  The new label Transitory Tapes will make its debut on January 31 with § from the enigmatic Lagas Turmales.  The sine-filled set is perfect for insomniacs and is follow-up to the mysterious,, still-uncredited Actasomno.  Despite what the press release may say, there is no such thing as “banger ambient” (an oxymoron if we’ve ever seen one); Tobias Karlehag‘s Process is instead soft and soothing, as we’d hoped to hear (Past Inside the Present, January 15).

Ambient music and clouds have a long-standing relationship, so Wil Bolton‘s Cumulus Sketches fits right in.  This is the first of two early-year releases on Home Normal, floating our way January 14.  This will be followed on February 18 by Andrew Tasselmyer‘s calming Impulses, also suitable for cloud-viewing.  But fans don’t have to wait to download Home Normal’s free sampler, containing tracks from all its 2020 and 2021 releases; it’s already available below.

Ryan Dugré‘s bucolic solo guitar conjures images of parks and streams.  Three Rivers will be out February 19 on 11A Records, promising wisps of spring.  Arnold de Boer‘s self-evident Minimal Guitar has a slightly ironic cover, in that the title is printed in all caps and fills the entire square.  Trust us, though, it’s minimal (Makkum Records, January 8)!  Fans of Folklore Tapes are already familiar with Dean McPhee, whose meditative guitar has been a source of enchantment.  Witch’s Ladder continues his mystical explorations, weaving a seductive spell (Hood Faire, February 26).  The prolific Rhucle returns January 15 with Royal Blue, a soothing set suffused with bell tones, flowing streams and a sense of peace (Oxtail Recordings). Ryan J. Raffa starts the new year right with a benefit album: We Have Always Existed is a balm for the marginalized, and hopes to raise awareness and funds for the Transgender Law Center (January 1). 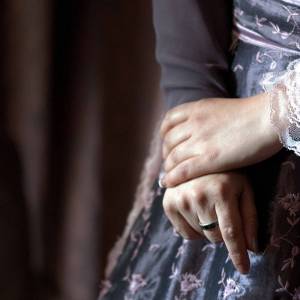 Isnaj Dui (Katie English) and textura return with the literary-minded Bright Star, inspired by a John Keats sonnet (found on the bonus bookmark). Even without words, the artist’s fluted ambience sounds like poetry (January 20).  Can’t get to the Louvre?  Allred & Broderick condense their eleven-hour slow tour soundtrack to a serving-sized disc, with the slightly misleading title What the Fog (Dauw, January 15).

When we hear “remix album,” we normally think of dance music, but Vargkvint‘s Hav Reimagined takes a different tactic.  The ambient mixes from Lucy Claire, Hoshiko Yamane, Kinbrae and more amplify Hav‘s original moods and make this release sound like a completely new work (Piano and Coffee Records, January 22).  On Animated Matter‘s Selkie, vocals are used as texture until they are not; and finally they are taken away.  We’ve been enamored with the legend of the selkie ever since The Secret of Roan Inish, and the music of this duo makes a fine addition to the creature’s romantic mythology (January 22).

Aria Rostami last appeared here on Geographic North’s Sketch for Winter series.  He’s since softened his timbre a bit more, thanks to quarantine and a reflective summer.  Acra includes guitar, piano and flute, and is released January 13 on Intimate Inanimate.  Soon after that, he’ll team with Daniel Blomquist for a return to his winter roots.  Still was recorded earlier, but is being released later; its theme of time distortion during cold weather is a perfect match for the perceptual shifts of a pandemic (Glacial Movements, February 15).

On Everything Is Always the Same, Intelligent Life offers a bleak pandemic score with titles such as “Shelter in Place” and “For Solitude.”   The music is a mix of ambience and dub, news and narcotized haze, with a healthy dose of contrabass (Audiobulb, January 1). Wilson Trouvé, better known to our readers as Monochromie, is now known as The blooming white orchestra as well.  The elegant Cinematic thoughts dances slowly on the border of modern composition, while possessing a calm ambient core.  The strings and piano wrap around the listener like a pair of warm blankets (January 14).

Important Records is jumping right into 2021 with four fascinating recordings, headlined by two new releases from the Harry Bertoia archive: Glowing Sounds and No Date Tapes.  This is in addition to the many recent editions from the influential artist’s catalogue.  In the same vein we find Tim Catlin’s Overtone Ensemble returning with the laconically-titled 2, continuing to investigate the timbres of the self-made Vibrissa instruments along with rods, tubes and other instruments (February 5).  And Alina Kalancea‘s expansive electronic tapestries take shape on the double LP Impedance (January 22).

Smile is a fitting title for the new nature-inspired set from Tomo-Nakaguchi, which includes twinkling studies of fireflies, leaves and drift ice (Audiobulb, January 6).  The Prophet 600 is the only instrument on Nick Schofield‘s Glass Gallery, which laces a new age vibe into vibrant compositions (Backward Music, February 5).  Exael expands a track into a full album with Flowered Knife Shadows, a synthesized set with a barely-disguised edge (Soda Gong, February 5).  With a fine resume that includes Pop Ambient, Joachim Spieth now introduces Oisia, pairing with Markus Guentner on the expansive “Mutuus.”  There’s a nice booklet included for those who buy the physical edition (Affin, January 13).

Norway’s mighty Biosphere is back, and Angel’s Flight promises to be one of the season’s most intriguing releases.  Inspired by Beethoven’s “String Quartet No. 14,” these pieces originally scored a dance production and may cause swaying or other gentle behaviors at home (AD 93, January 22).  Concentric Records continues its various artists series with Colliding Wind, whose all-star cast includes Christina Vantzou, Jana Winderen and Soundwalk Collective (January 15).  Techno artist Kosei Fukuda slides in a different direction on the double album 流転 陽・RUTEN +<//a>, often leaving the beats behind to focus on texture and time.  The mood is reflective, suffused with an experimental flair (REITEN, January 22).

ASERET‘s debut album Consciousness of Undefined lacks beats, but tempo is suggested by the ambient synth.  The music is trancelike, aided by the length of the tracks; the shortest is twelve minutes long, the longest twenty-four (Midira, January 15).  In contrast, Benjamin Louis Brody and Ian Chang‘s Floating Into Infinity was written with percussion in mind.  Son Lux drummer Chang lifts the listening experience into something ritualistic and rapturous (New Amsterdam, February 12). 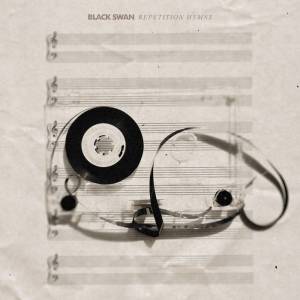 We love what Past Inside the Present writes about Black Swan‘s Repetition Hymns:  “(in) the temporal distortion of quarantine, each day feels like an endless repeating loop.  Our bleeding hearts are in need of drone like never before.”  But while the loops may be endless, the album is not, featuring 80 minutes of restive, often choral music, or as PitP writes, “slow music for slow times.”  Can we hire their writer? She Was a Visitor is a new moniker for an artist we’ve featured before, but we’ll have to keep his/her identity secret for now.  We can tell you that the music of ISO 220320 was recorded in the early days of lockdown as an exercise in creative sanity, and that the abraded textures and embedded voices echo like the ghosts of generations past (Bare Hands Records, January 15).

Aguirre Records is releasing four albums on January 22, two of which are found here and two in our Rock section; quite a feat.  Hellvete‘s Voor Harmonium is just what it sounds like, two side-long tracks that undulate and expand.  Timelash‘s A Morphology of Wonders is often unsettling, with timbres that range from ice cream trucks to alien growls, with a few beats mixed in along the way.

By removing signal from noise, Lijnenspel creates soft, soothing drones while celebrating, rather than decrying, the act of Compression (February 19). The third part of Guy Andrews‘ triptych will finally appear on January 22: a pair of long remixes from Kevin Drumm, one each from Andrews’ two recent albums.  The embedded sounds may be recognizable, but the timbre is thick and immersive (Houndstooth).

Cellist Martina Bertoni‘s Music for Empty Flats sounds as forlorn as its title, yet manages to conjure encouragement through the lush green of its cover photo.  This is drone in the manner of Richard Skelton or Galya Bisengalieva, skirting on the edges of modern composition with a great sense of grandeur (Karlrecords, January 29).  The same holds true for Giulio Aldinucci‘s Music from Organ, a series of pipe organ recordings graced with the colors red, gold, blue and marble (npm, January 11).  Linus Hillborg‘s Magelungsverket may contain orchestral elements, but it sounds like the soundtrack to a walk through a long, dark alley.  That’s exactly how the music began: a late-night installation integrating the deserted Stockholm streets (Moloton, January 22).  Expansive organic drone can be found on Henry Birdsey‘s Half-Dragged, which focuses on lap steel guitar and just intonation (Other Minds, January 29). 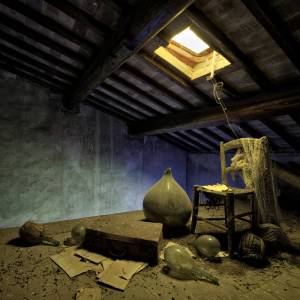 On Distortion Hue, Byron Westbrook‘s synth is sometimes sweet, sometimes menacing.  There’s a sci-fi feel to the set, reflected in the collaged artwork (Hands in the Dark, February 5).  Gongs, drums and singing bowls populate Jon Mueller‘s Family Secret, but we can’t help wondering: is that the artist’s real attic?  It’s a spooky, dusty sort of place, explained by the fact that the album reflects on divorce and its corrosive effects on a family (Rhythmplex, January 22).  MYMK‘s The Amputees is a study of frailty, featuring distorted guitar, dark drone and a seriously disturbing cover image.  Some segments are tender, balancing the abrasion (Beacon Sound, January 8).

Of Thread & Mist is the new moniker of Gizeh’s Richard Knox, as heard on the December label compilation We Hovered With Short Wings.  Static Hymns to No One is two gorgeous, side-long tracks of guitar, choirs and loops, which seem to suspend time as they unravel (January 22).  TONUS x A-Sun Amissa presents Modulation Grid II, a sequel to a spring 2020 release.  This new offering pairs the original TONUS version, recorded live in a church, with a reconstruction by A-Sun Amissa (Midira, January 15).  Ritualism, the occult and the apocalypse collide on FOUDRE!‘s immersive set Future Sabbath, culled from its live shows.  The album scores our current age of anxiety and doubt, and unsettles the listener via sheer visceral power (NAHAL, January 15).