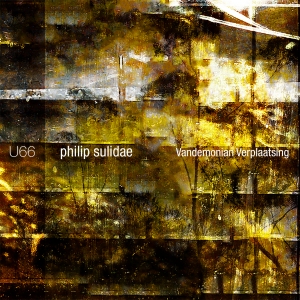 Two new recordings from Unfathomless approach field recordings from different angles.  One is location based, the other theme based.  Together they form an intricate lattice of sound.

Vandemonian Verplaatsing (the latter word meaning displacement) collects recordings made in Hobart, Tasmania over a number of years.  This is the third Unfathomless release for Philip Sulidae, who also runs the Hemisphäreの空虚 label.  The artist raises questions about the perceived impact of displaced recordings, scattered across time and space.

Ask most people what they know of Tasmania, and they will likely mention the Tasmanian devil, dust whirls and perhaps that Hobart is the capital of the Australian island.  They may not think of apple cider and art galleries, waterfalls and wine.  In conversation and closing doors, Sulidae introduces human elements.  Other segments address nature.  Yet the primary timbres are neither nature nor commerce, but a liminal third.

Traffic passes; water laps; but what are these other sounds?  Even Sulidae may no longer recall, as these recordings have been processed, layered, and displaced.  A snippet of a rain shower nudges against a dragged pipe; a running road borders a rivulet; chalk is scrawled on a board.  Each track bears an address, but the uses may have changed (one, recalling Joni Mitchell, is a parking lot) in the ensuing years.  Lost in time, these sounds beg for context, and where none is provided, create their own impressions.  The last and loudest piece contains beeping and burning (or it may not) ~ perhaps a commentary on societies found and dismantled, a metaphor for our modern age.

In contrast, Simon Whetham‘s Dry, recorded in both Germany and Norway, focuses on bodies of water and human efforts to contain them.  The title refers not only to aridity and environmental degradation, but to recording techniques.  Whetham sets up near “steel, wood and concrete,” capturing sounds he will later filter and re-filter through the very same materials, producing an aural distance, in the same way as the barriers produce a distance between the natural flow of water and the guided or (temporarily) contained.

This being said, the album begins with a clang, as “locked” implies turgid water restrained behind a monstrous edifice.  As natural disasters demonstrate, hydrogen and oxygen simply bide their time.  This foreboding sense hangs over the work, conjuring memories of the Norwegian film “The Wave,” inspired by a true-life tragedy.  The set also draws comparison to Galya Bisengalieva’s Aralkum, which highlights the evaporation and slow recovery of the Aral Sea in the wake of shortsighted human construction.  Whetham’s re-filtering creates an impression of distance, echoing that between environmental threat and willful ignorance.

The album’s irony is that it starts off dry, but grows wetter as it progresses.  One can almost hear rushes of water through empty pipes, rivets popping, scientists and seismologists shaking their heads and saying, “We told you so.”  A period of relative silence in “reserved” is heard less as calm than as coiling.  As the sonic field darkens with drip and drone, an inhuman heartbeat is heard, a reminder that nature can adopt seemingly malevolent forms.

Then the water begins to flow, released in an instant, as in a faucet or dam.  Time and again, the demon is put back in the box, and each time the lock weakens.  The demon is not the water itself, despite our anthropomorphic attentions; the demon is hubris.  Who are we to believe we could contain the elements and bend them to our will?  Who are we to cut corners, to shortchange the earth for our own short-term gratification?  To paraphrase an old saying, “Man makes plans; the water laughs.”  (Richard Allen)