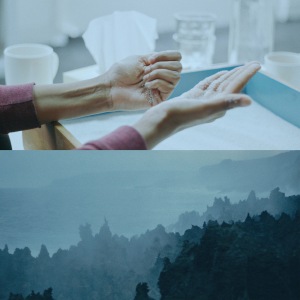 Island of the Hungry Ghosts is a dark, three-tiered film. Billed as a “hybrid documentary,” the film receives a hybrid score, with music from Aaron Cupples and field recordings from Leo Dolgan.  The sound design is cinematic even without the visuals, producing the mental images to match the subject matter.

When watching the trailer, one receives a feeling of foreboding.  Millions of migratory crabs scuttle across the screen on their way to the sea.  Edit the trailer in another way and one might be seeing a horror movie. These crabs may be part of Christmas Island, but also act as a metaphor.  The center of the jungle is also the location of a high security refugee detention center: huddled masses yearning to breathe free, to find safe harbor.  But not everyone makes it.  “Hungry ghosts” die without a burial, honored by Buddhist ceremonies conducted by the locals.

“Night” begins with the sounds of the jungle and intimations of the full moon.  The crickets are chirping; the birds are calling; the crabs are marching as refugees gaze through windows.  Slowly, Cupples introduces peaceful tones, as if to assuage.  In “The Understorey,” the undercurrent grows dark, with drones and claws.  The blowholes of the subsequent piece are like land mines: eruptions of dark thoughts, sudden dangers. Why do they get to leave, and we don’t?  The refugees have fled one set of untenable conditions only to land in another.

Are hungry ghosts really wandering the jungle at night?  Will the percussion put their souls at ease, or awaken them to a ravenous degree?  The chimes imply the possibility of a higher plane, but the louder the drums grow, the less sure the listener is of safety.  “Fire and Jungle” implies purification as well as rage.  “The Protester” may be protesting against conditions at home, conditions at the refugee center, or both.  The refugees may see kindred spirits in the crabs making the treacherous journey to the sea.  When Cupples pairs the sound of the waves with that of a low-level drone, the end result is both taunt and promise, the sea symbolizing both barrier and life.  The whispers are prayers, but the ocean is impassive.  In contrast, Cupples provides a slightly hopeful ending with suggestions of orchestra and theremin ~ not enough to provide a happy ending, but enough to make a harrowing story palatable, inviting empathy rather than despair.  (Richard Allen)