SP* Episode 17: BEFORE THE INTERNET – with Geng PTP [podcast]

It’s been a tough year for New York. This episode we check in with Geng, the man behind one of our favorite labels, Purple Tape Pedigree, and see how these fine “purveyors of weaponized media and information” are handling the pandemic and the uprisings. With live performance no longer an option, the model of mutual support demonstrated by a crew like PTP is all the more important. Geng tells us about the history of PTP, the benefits of peer-support, community activism, and why it’s more important now than ever to understand hip hop as spiritual music.

Episode 17: BEFORE THE INTERNET

Sound Propositions should be available wherever you get your podcasts, so please keep an eye out and subscribe (and rate and review, it helps others who might be interested find us). You can support Sound Propositions on Patreon if you are so inclined, or send a one-time donation via PayPal. I’m very grateful for any support, which will help ensure future episodes. Supporting the podcast on Patreon grants access to vocal-free versions of the episodes, as well as other benefits for higher tiers of support, including custom made mixes, soundscapes, collages, and other custom projects.

Interview recorded between Montreal and Queens, May 2020 and January 2021
Produced and mixed in Montreal, February 2021

Geng is a musician, producer, archivist, and teacher whose roots in New York hip hop culture run deep. He was out networking back before the internet, trading taped radio broadcasts, digging for records, hunting for the new thing. Back then we just got fragments of stories, and through bits and pieces you could catch a glimpse of a broader network. History was being constantly written over, like tags in a bathroom stall or stickers on the wall of CBGB’s. It was like picking up a comic book issue in the middle of a story. Out of context, no idea what’s going on, but it could still suck you in. And often what you imagine in your mind turned out to be more interesting than the real thing, but this was just motivation to get out there and do it yourself.

A recurring theme in our conversation in this episode is how much the internet has changed culture, and the culture in New York in particular. This isn’t about some romantic past we’re nostalgic for, but simply being clear-eyed about what’s changed and what’s been lost. Boroughs or even neighborhood specific accents, slang, and fashion has largely become a thing of the past as the culture has become more homogenized. The post-9/11 remaking of the city has seen a lot of old venues and record stores shut down, places that were fundamental to the development of various interconnected underground music scenes, and to Geng and I personally. The influx of new people to the city, and especially the ubiquity of smartphones, has transformed the social scene in ways both subtle and overt. Due to the internet, information is now easy to come by, but simply knowing something isn’t a replacement for the social connections that used to accompany the process of discovery. It becomes easier to find out about something and show up, but on the flip side audiences become less invested as our collective attention is stretched too far.

Geng is steeped in hip hop history, and as a DJ and producer, the search for sounds has been a central part his artistic trajectory for decades. Ever since first hearing Salt-N-Pepa as a young man in the late-1980s, Geng has been a real hip hop head. Raekwon’s 1995 masterpiece Only Built 4 Cuban Linx… is the titular purple tape honored by his label’s name, but those days of hunting for tapes at Tower Record quickly gave way to schlepping to parties with crates of records. Record stores like Fat Beats and Other Music turned him on New York’s underground, with Company Flow’s Funcrusher (featuring a young El-P) marking a defining moment. Known as Grey Type back then, Geng became part of the Atoms Family crew, alongside future Cannibal Ox members Vast Aire and Vordul Mega. While they didn’t release much music at the time, the sprawling collective made a name for themselves showing up in ciphers and playing shows around in the greater NYC area, including classic spots like the Nuyorican and the Wetlands.

For me as a teenager in New York, punk, hip hop, noise, and electronic music all shared the same DIY spaces, and often these were wrapped up in politics. I feel this spirit still with PTP. Their artists don’t adhere to the conventions of any one genre, and each release can have an entirely unique sound from any other. That said, the label has cultivated a kind of shared aesthetic, it just comes from their energy rather than any particular sound. PTP began as a blog, and gradually grew from there, bringing in friends to contribute writing and photographs, and eventually transitioning into a collective label. Early on, PTP was mostly focusing on 12”s and DJ culture, but after some considerable challenges posted by selling vinyl Geng decided to shift towards the ease of cassettes. Around this time, Geng produced “This Week” for Moor Mother, an experience he discusses in this episode as a catalyst for his reinvention. Peer support “put a battery in [his] back,” giving him the confidence to self-actualize and release more music of his own after some quiet years. In 2018, he released Pain of Mind, his debut under the alias King Vision Ultra. The issues raised in that work were really personal for Geng, leading to the first Silent Weapons show, which grew into monthly gatherings that were also fundraisers for causes ranging from aiding incarcerated individuals to food and coat drives. Richard Ross’s photo book Silent Weapons beautifully documents those events, now on hold during the pandemic of course.

It was at one of those Silent Weapons events that Geng reconnected with Amani, a young MC from Brooklyn. During the first eight months of 2020, the two produced An Unknown Infinite, one of my favorite records of 2020. It’s a record that pays homage to many generations of New York, it sounds like New York without bowing to any clichéd expectations of what that is. The opening track sets the scene with a mixtape like send-off from the legendary Monie Love, as well as some words of wisdom from the Professor himself, Milford Graves. The first proper verse comes not from Amani, but from ELUCID, in a brilliant act of baton passing that connects the 80s, 90s, and the present.

But it goes beyond that, and beyond hip hop. This is spiritual music, as Geng points out, and those lineages run deep, something signaled by the album’s title. For that reason, this his episode is dedicated to the late great Professor Milford Graves, who passed away last week on 12 February 2021. Graves voice and drumming appears on An Unknown Infinite, after Geng and Amani bonded over Graves message after seeing Full Mantis together. Along with Sonny Murray, Graves was instrumental to the innovations of free jazz. “The New Thing” necessitated a new way of thinking about the role of percussion, and Graves transformed that, drawing on his experiences in Latin Jazz ensembles and refocusing his attention on the body. When Graves talks about the importance of playing from the heart, he means it. The heart beat is that pulse that we all share. 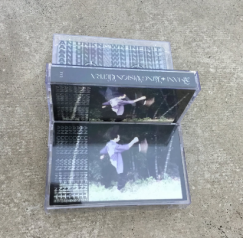 Geng writes about the importance of skill sharing in the Wire’s  2020 Rewind issue, of “not hoarding information and knowledge”, but sharing personal experiences for others’ benefit. He makes sure younger artists know “that they’re allowed to push back,” and that they’ve “got to be counter-industrial and counter-cultural in stance.” The tension between making art and selling commodities is something that comes up often in our conversation, and it’s not an issue that can just be ignored or wished away, as it’s the artist’s labor that is most likely to be exploited and taken for granted. And that’s why it matters that Geng and the PTP crew are building something more substantial and more meaningful. When we speak of community, it’s amazing that we can speak of the global decentralized network that we are. But ultimately as 2020 demonstrated, we have to live up to our obligations to those actually around us first. There’s going to be a difficult period of contestation in the wake of this pandemic. Small businesses are failing, and only corporations and investor-backed businesses are going to be able to re-open in their place. The future of live music may have to finally decouple from the sale of alcohol. Mutual aid is going to be necessary, and we’ll build from there.

I first spoke to Geng on 27 May, between the murder of George Floyd and the burning of the 3rd Precinct in Minneapolis. He had just finished QUATTRO (death circus), a visual EP re-scoring of Yoshiaki Kawajiri’s The Running Man, a 1987 animated cult classic that was part of the Neo-Tokyo anthology. This led to a lot of talk about cyberpunk, skate videos, film scores, and the long and complicated history of sampling and questions of appropriation. (Geng is teaching a class called Found Sound: Authorship and Appropriation, which you can sign up for here if you’re interested.) But then of course the summer of protests kicked off, and An Unknown Infinite was released in August, so I called up Geng again in January to talk about everything that’s happened since then. About a quarter of this episode comes from that second conversation, but I’ve got a whole other episode planned with Geng, going deeper into those discussions about the politics of sampling, the tension between capitalism and art, and especially the legacy of MF DOOM.

Public Enemy – “Leave This Off Your Fuckin’ Charts (instrumental)” (Fear of a Black Planet, Def Jam, 1990)