Clark ~ Playground in a Lake 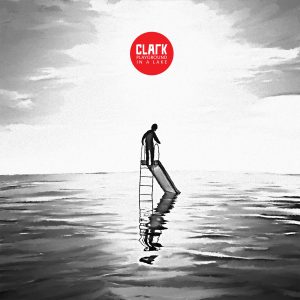 Playground in a Lake is about climate change, the loss of innocence and the death of humanity: a concept album about the last person on earth.  In tone, the album recalls Last Days’ The Safety of the North, although the finale is bleak as that of We Lost the Sea’s Departure Songs.  By the end, the listener has been brought through the wringer, emerging with greater knowledge and perhaps greater resolve.

The same Clark whose IDM stylings have thrilled fans for decades has branched out into diverse territories.  The album begins with a classic string overture, as befits the Deutsche Grammophon label, proceeding swiftly to the piano-centric single, “Lambent Rag.”  This piece has the advantage of a video as well, and through its lens we intuit the possibility of adapting the full set for modern dance.  Only one adult is present as a novelty to the nonplussed children around him.  The rhythm explodes midway, exposing Clark’s electronic roots.

The early pieces score the innocence of children, but they won’t last.  Knowing that the album will proceed to apocalypse allows one to accept the gradual injection of dark flavors.  The bittersweet “Forever Chemicals” bears the warning in its title, backed by a crackling electronic undercurrent. The waters are rising.  A choral voice appears in the second half, pre-lamenting.  Keyboard portals appear in “More Islands,” presaging the voice of second single “Small.”  Finally it’s over; I can only offer you my condolences.  The more you were asking for it, the less tragic it is.

And then it is dark.

As the orchestral flourishes begin to drown, the skeleton of “classic” Clark emerges, fragmented and futuristic.  By “Aura Nera,” the timbre has turned to drone, intimating the flood of water now engulfing the earth.  Is no one left to play the orchestra’s instruments?  Are we only able to push buttons to make the music appear?  If there are no sticks, no stones, will there still be rhythm?

The album passes into an elegiac stage, a blanket of sonic comfort far from its humble origins.  As one title indicates, we are “Already Ghosts.”  Now the music sounds like unheeded alarms with no off switches.  “Earth Systems” is harrowing, suffused with depth charges; even the dancers have drowned.  Innocence is a distant memory because human life is a distant memory, the bodies beneath the sea returning their nutrients to the water.  Lingering lyrics are heard as final transmissions ~ I wish I could come back.  The strings bob to the surface one last time.

By refusing to give the album a happy ending, Clark seems to echo the words of Thunberg:  I want you to panic.  The end of the world is an entertaining topic, but it’s going to take a lot of hard work to prevent this science fiction tale from turning into a documentary.  (Richard Allen)