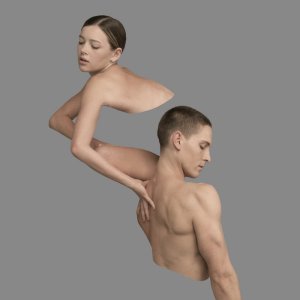 Impermanence/Disintegration is an album of its time, written in response to one disaster and recorded during another.  In the wake of the 2019 Australian wildfires, the album was conceived as a meditation on the “fleeting transcience of life.”  Bryce Dessner, the Australian Sting Quartet and the Sydney Dance Company had planned to debut the performance in March, 2020, but were shut down by the pandemic, a further imposition of the “mutability of structures.”  But this delay may work in their favor.  During the lockdown, the musicians recorded while the dancers continued to rehearse.  This year, the stage rendition was unveiled to even greater meaning, carrying the resonance of a year and a half of disruption.  The titles “Alarms,” “Embers” and “Ashes” refer to the fires, but now serve as metaphors for the world condition.

The music begins in a wildfire arrangement, “Alarms” and “Alarms 2” rapid, frantic and fierce, bracketing the softer “Disintegration.”  One can imagine the dancers racing about, searching for exits, echoing the local wildlife, caught off guard by the surging towers of flame, hoping to get to the shore.  In like manner, one can remember the early days of the pandemic: sudden lockdowns, rampant fears, unexpected deaths.  The quartet’s energy captures the agitation, while its restraint honors the brief reflection, a pause between crises.  We are in a state of “Emergency,” flanked by staccato strings.  There is no time to count the lost.

Light electronics appear in “Emergency” like signal flares.  The adornments contribute a sense of urgency, growing more insistent in “Pulsing.”  Nothing is permanent, though many things seem to possess such a quality.  As Sting writes, “how fragile we are.”  Now extend this thought to supply chains, ecosystems, global immunities.  As Yeats writes, “things fall apart.”  We should have known this, yet we didn’t; or we pushed it to the back of our minds.  Now the world is burning, a pandemic rages, rights are trampled, systems fall.  This isn’t what Dessner wanted to write about, and yet the composer was compelled.

“I need another world,” Anohni sings on the closing track, a cover of Antony and the Johnson’s “Another World.”  “This one’s nearly gone.”  The press release claims that the song offers “great levity and hope,” but the tone is bittersweet:  “I’m gonna miss the birds / singing all their songs.”  But in light of recent circumstances, it’s okay not to feel levity.  As Greta Thunberg warns, “Our house is on fire.  I don’t want your hope.  I want you to act.”  (Richard Allen)