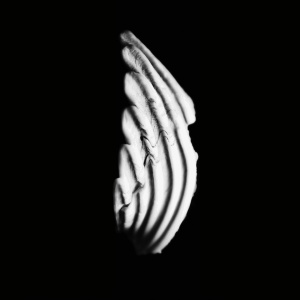 In the parable of the blind men and the elephant, six men feel different parts of the creature ~ tusk, trunk, tail, ear, leg, side ~ and after doing so, draw different conclusions.  In like fashion, various reviewers have categorized KMRU as being ambient, electronic, and experimental, while noting his use of field recordings. Each facet represents a different side of the artist.

Last year, Joseph Sannicandro ran an in-depth feature on Nairobi’s Joseph Kamaru, including an enlightening interview.  2020’s Peel made both our year-end ambient list and overall chart.  The album represented what some writers called a progression from a more rhythm-based sound to a more ambient-based sound.  Logue seems to travel in the opposite direction, until one realizes that the new album is a compendium of “early” self-released work from the artist ~ the quotes used because the artist is still young, and the music was recorded from 2017-19.

All of the aforementioned styles are represented, yet the album flows beautifully from start to finish, a function of wise sequencing ~ something hard to do when tracks were not originally recorded as part of a set.  Logue has a freshness of spirit that reflects the joy of the artist as he begins to set ideas to tape.  And now we arrive at a reviewer’s conundrum: I like KMRU’s latest album more than his last, although it was recorded earlier.  Will the artist receive this as a compliment?

I spent eight days in Kenya in the 90s, including two in Nairobi, and was quickly adopted as a friendly mzungu.  The experience was life-changing.  During that short period, I came to realize that the people there had a lower standard of living that I, but as a whole were happier than the average people in my home country.  The difference was due to community and a sense of pulling together.  While this is an oversimplification, in the United States, people expect everything to go right all the time, so when it doesn’t, they get grumpy.  In the tiny town where I stayed, people expected things to go wrong all the time, so when they didn’t, they rejoiced.  This is the spirit of Logue.

The album feels like the country, although it includes tracks inspired by journeys to neighboring nations.  At the same time as Kamaru is exploring new territories, he’s also exploring new avenues of sound.  “Argon” may begin as an ambient piece, but soon the electronic textures begin to bubble to the surface like camouflaged creatures in the rain forest.  In “Jinja Encounters,” field recordings begin to flow: running water, local birds, creaks and conversation.  Harp sounds join the picture, offering an air of modern composition; and soon, even a post-rock tinge.  This means Kamaru has touched on six out of seven of our genre tags, the only exception being drone.  The combination of African rhythms and instruments with electronic timbres creates a mesmerizing cross-blend.  “OT” sounds like early Aphex Twin, another artist whose spots changed over time.  This time, the field recordings are joined by tribal chants, a reminder that such elements sound more authentic when coming from an artist who lives in a tribal nation rather than a Western-based, urban-dwelling musician with a sampler.  The sound design and stereo effects are exquisite, most dynamic in “Und” although the title “A Meditation of Listening” says it all.

In another context, “11” might be an invitation to the dance floor.  In this context, it’s a reminder that in most of Africa, people are not waiting for clubs to open in order to dance.  Dancing, singing and music-making are integral parts of life, a reflection of nature’s rhythms, caught by KMRU like rain in a basin.  For me, the album is a happy reminder of a realigned mindset.  For the rest of the world, it may arrive as a soft revelation.  (Richard Allen)