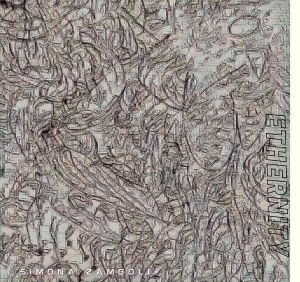 “Take me somewhere,” sings Simona Zamboli on the song of the same name, the only vocal track found on the immersive Ethernity.  The plea is wobbled, looped, and folded into pulsing pads with an ever-increasing insistency.  While some may perceive the request as earthly, the artist offers the otherworldly, hinting at interplanetary or multi-dimensional travel.  This sci-fi sheen informs the length of Ethernity, which seems like a transmission from a friendly sister galaxy.

Ironically, the artist asks to be taken somewhere while taking her listeners somewhere: an escape only of the mind and soul, but a journey nevertheless.  Switching between flavors of industrial and IDM, she creates a sonic atmosphere in which anything might happen. She even begins the album with an “Interlude,” defying logic.  This piece sounds like all of the alarms ringing at once as one awakens from a cryogenic sleep.

There’s mystery in these grooves, hidden deep, like the figures embedded in the cover art.  “Dream But Be Careful” sounds as if it might have been recorded in a bathysphere, uncatalogued creatures streaming past reinforced glass, oblivious to the outer pressure.  The elaborate circuitry glows with matching bioluminescence, communicating in a manner that humans cannot.  “Dream” segues into “Noise hub,” which yields the album’s first prime passage at 1:44, an echoing synth line that recalls some of the classic innovators of Mille Plateaux, in whose ranks Zamboli is now included.  One also recalls mid-nineties industrial music, which seemed primed to tip into greater complexity before choosing another path.  Zamboli resurrects the discarded dream and carries the banner for a new generation.  “Compossibility” is a prime example, beginning with a club floor sequence, veering into off-kilter rhythms, and eventually landing on steady feet.  Once the dancers find their bearings, Zamboli can pull the rug out again without toppling them to the floor.

We need more electronic composers like Zamboli, as the field is primed for exponential growth. Even a cursory glance at the popular electronic music chart reveals that innovation has stalled in the mainstream.  When Mille Plateaux was launched in 1993, it had access to avenues of exposure that have been greatly curtailed since then.  And yet the label’s influence has rippled across TV and film soundtracks and even hip-hop in the intervening years.  Zamboli has the potential to become a game changer; Ethernity is not her first album, but it may be the one that makes the biggest impact. It’s the sound of the future, now.  (Richard Allen)