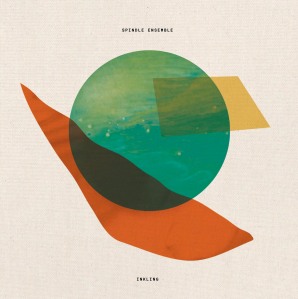 This beautiful fried egg of an album has been sizzling for a couple years, with a double-sided single in 2019 followed by a third single in 2021.  Now the butter has permeated the recording and the yolk is a gorgeous orange, as one can see in the limited edition colored vinyl.  Inkling is the follow-up to the sumptuous BEA; the quartet has only improved with time, and their slow cooking is an integral part of their success.

It’s no surprise that “Chase” is the first single, as the 3:20 length provides an encapsulation of the band’s sound.  The piano jumps right in with a memorable melody, followed by the mallets and strings (plucked and bowed) in turn.  Once again, everybody seems to be having SO MUCH FUN!  A smile escapes cellist Jo Silverston’s lips just before the quiet part.  But the reflection of slow bows and soft blows doesn’t last long.  The clock is ticking; there’s no time to waste!  In the video, Harriet Riley (marimba) seems lost in a trance, but at 2:37, everyone is on point for the grand re-entry and percussive finale.  In the final seconds, she acts as a drummer, adding an ebullient flourish.

Watching the quartet in action has been captivating ever since “Panic amongst the dragonflies;” once concerts resume, Spindle Ensemble should be top the must-see list.  This being said, Marie Lechevallier’s lovely cinematography for “Okemah Sundown” allows one to concentrate on the music as a whole.  The timbres drift like waves of clouds across a sunlit sky.  The piece is a lava lamp lullaby with an ensemble size of ten, which will increase to twelve for “Waves.”

Narna Hue’s Super-8 and scratched 16mm footage adds a nostalgic hue to “Caligo,” released earlier this year with worthy b-side “Ménilmontant, inspired by the 1926 silent film.  There’s the sun again, a staple of the band and a reminder of the album’s cover image.  But now the sun becomes a circle, or perhaps a porthole through which one might comprehend the universe.  Some of the stills would make great tour posters.  When the upright bass retreats at 2:34, the composition enters a period of pause.  The world turns black and white, then springs into color again before integrating the two, honoring the creature that gives the track its title; caligo is the scientific name for an owl butterfly.

The singles may be the entry points, but the longer pieces are the meat of Spindle Ensemble, where they experiment with form and abstraction.  The title track is a study in contrast, like the measured pace of a stalking cat followed by an avid pursuit and long, delicious meal.  “Waves” is a showcase for pianist Daniel Inzani and violinist Caelia Lunniss, whose excisions in quietude pave the way for the entry of the full orchestra.  The relative restraint of the final minutes stands in stark contrast to the jauntiness of “Chase.”  This ten-minute track is not a single, but it demonstrates the ensemble’s tonal range and as such is the reward for entering the album.  With two solid albums under their collective belt, Spindle Ensemble is well on its way to a stellar career.  (Richard Allen)