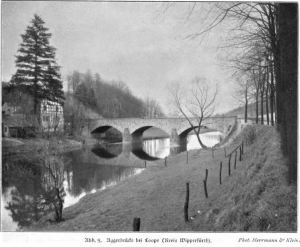 I’m a bit envious of Nico Walser (giant skeletons), who has made great use of his pandemic time in recording an audio geography of his hometown of Engelskirchen, Germany. Such a project has been on my bucket list for a while but since it didn’t happen during the pandemic, it will probably have to wait until I retire.  This is the sort of mirror every town should have, but few are so blessed; his home town can be proud to have such a happy document, which serves as both celebration and invitation.  The town was already magical, known for the Christ Church post office that receives and responds to children’s Christmas wishes, but Walser makes it even more so.  Musikfonds Berlin proves itself to be forward-thinking in funding the project.

We begin by the river Agger with the gently lapping sounds of water, joined by the artist on grand piano, which he did not lug out to the river, but recorded while homeschooling his son during the pandemic.  Young Ben can be heard in the background and will reappear later on.  This endearing combination joins the command to remain inside with the dream of returning to nature.  The next piece is recorded in a cave, a natural wonder to which citizens might escape, if only for a respite. The echoes seem lonely and comforting all at once.

Then a trip to a human wonder: the Peter Ibbetson antiquarian bookshop in Ründeroth, where bindings are still prepared in the old manner.  The historical connection is strong, as is the thought of producing enduring artifacts in a digital era.  The clippings and cuttings are embedded in a soft sonic miasma that envelops the listener like a good book.  “The Time of Fallen Trees” makes an interesting follow-up, as books are made from trees, which lends the piece a wistful nature; the fallen become the praised.  It’s still tough to hear the sound of clearcutting and to rue what has been lost.  At the end, a bird flies away, in need of a new home.

But let’s not dwell on such things for too long.  The ebullient “Spinning” provides piano accompaniment for the spinning of bicycle wheels, a popular pastime during the pandemic.  Someone also seems to be cutting vegetables for a meal.  This is followed by the sound of dial-up, perhaps less extinct than we thought, in a “Steel symphony” that celebrates local industries past and present, which includes the office staff (still not getting through!).  Walser obviously has a great love for his subject matter, an empathy for the common worker, a joyful nobility lent even to tedious tasks.

“Adventures in the yard” is accompanied by a cheerful description:  “A gumball machine, a school bell, a yard and children: the adventure begins.”  We’re not sure when German children returned to school, but seeing one’s mates is always a pleasure, and the day is one of rejoicing for parents as well, marked here with large chords and a sense of relief.  Unfortunately all of the town’s children were eaten by a pond monster the following day, as the parents had not checked to see if one had moved in during the pandemic (see photo right).  One can hear Ben singing from the belly of the beast in the subsequent piece, a propulsive tribute to Kraftwerk and another possible single.  While Ben figures out how to escape, Walser consoles himself with a piano and a leafblower.

One track that won’t be a single:  “All yesterday’s parties,” the title referencing a hit by The Velvet Underground, the subject sorrowful.  Due to the pandemic, the carnival has been cancelled.  Come back in 2021!  Returning to nature, the artist encounters bees, owls and red kites; again, gently, the water flows.  Eventually the river ~ either the physical river or the river of time ~ will carry us to a new place, where the streets are filled once more with parades and the sound of playing children. (Richard Allen)